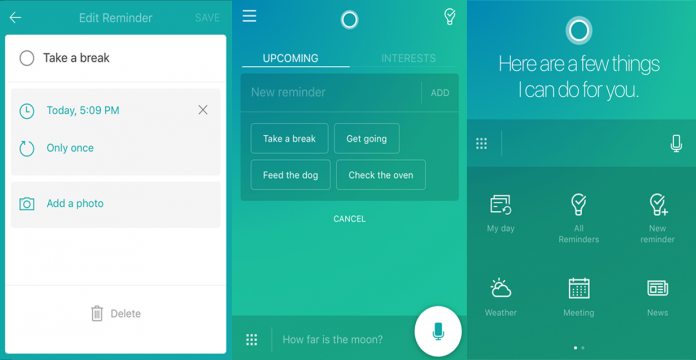 Microsoft released a major re-design for Cortana back in March, but it hasn’t stopped tweaking things quite yet. Today marks some changes for Cortana for iOS, including improvements to reminders, UI, profile pages, and performance.

Most notable are the visual changes, which include frameless graphics and new, bold color themes. Like all good design tweaks, though, it also streamlines the interaction experience. The new reminder interface lets users create notes with a couple of taps, using AI suggestions for faster completion.

Perhaps more important, however, is the responsiveness. Thanks to the update, Cortana for iOS feels much snappier. Part of that is down to performance improvements, but much is thanks to reduced animation times and faster page transitions.

Of course, Microsoft has also fixed several bugs, but it also hints that this is just the start. At the bottom of the 2.6.0 changelog, it states:

“This update sets ground for many exciting features to come. No matter what’s going on in your life, Cortana’s got your back.”

That sounds like it could either be really great or cause a lot of controversy. The last thing Microsoft wants is a repeat of the Skype app update, which led to terrible ratings on the app store.
Going by these latest tweaks, though, Microsoft seems to be on track, and it’ll be interesting to see what comes next. In the meantime, you can get the latest version from the App Store.
Advertisement