The last decade has been troubling for Microsoft and the PC market. Windows depends largely on computing sales and PC shipments have declined drastically. The smartphone has replaced the desktop or laptop as the computing device of choice. However, research company Gartner says PC sales will still increase based on one category in the coming years.

Since the halcyon days of the PC, sales have been on a sharp slope. In recent years, the decline has intensified with unit shipments falling from 365 million in 2011 to 263 million (estimated) for 2017. The market has impacted some of the largest electronics companies on the planet such as Sony (sold its Vaio brand) and HP (split its consumer and enterprise divisions).

Market research firm Garnet believe there will be a small spike in computing sales this year. However, the company is pointing to one category (premium ultramobile) as the driver behind the resurgence. It is also worth noting that while Gartner believes PC sales will increase in coming years, they will still be below even 2016’s levels.

Still, any recovery is a good one at this point. While the smartphone has consumed the PC market, it is not the do-all device that some believe. It is perfect for casual users who want to browse, play games, and tap away on social media. 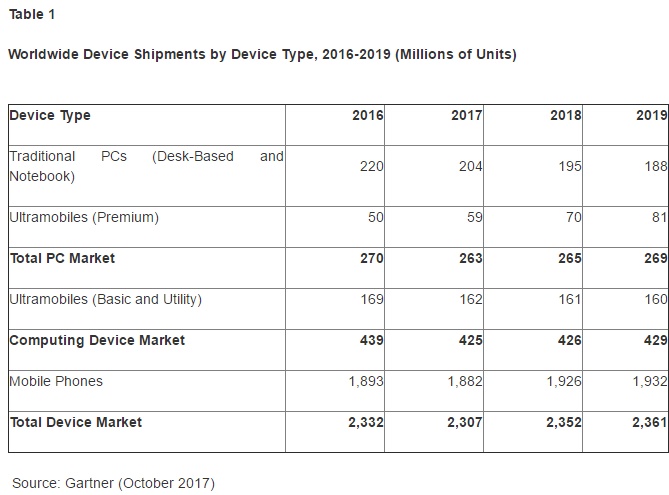 However, while companies have tried to make handsets productivity-compatible, it has never quite worked. Sure, you can get a lot done and do it well on a smartphone, but a PC is still where it is at if you want to get serious work done.

This is where Gartner’s Premium Ultramobile devices come in. The company describes these products as devices like high-end ultrabooks and 2-in-1 hybrid devices. This category of device typically retails around $1,000 and above, the firm adds.

While traditional PC and laptop sales will further decline (220 million in 2016 to 188 million in 2019), Premium Ultramobile will increase.

Of course, this is hardly a new prediction as it is clear these devices are becoming more popular. There are clearly still consumers that want computing power that they cannot get on mobile. Microsoft has been one of the benefactors of this growing space, and arguably the driving force behind it.

The company’s Surface devices have hit their mark and enjoyed consistent sales in recent years. However, sales are never going to reach huge levels. Like tablets, PC products face the problem that customers see no need to incrementally update hardware every year. PCs are built to last years, and most customers are happy to use them for years.

Smartphones are a different animal as customers want to update their device every one or two years. With that in mind, don’t expect the Premium Ultramobile market to be behind a grand resurgence of PC computing.

Instead, it will very likely remain a niche category, albeit one that performs well and keeps the PC market ticking along.