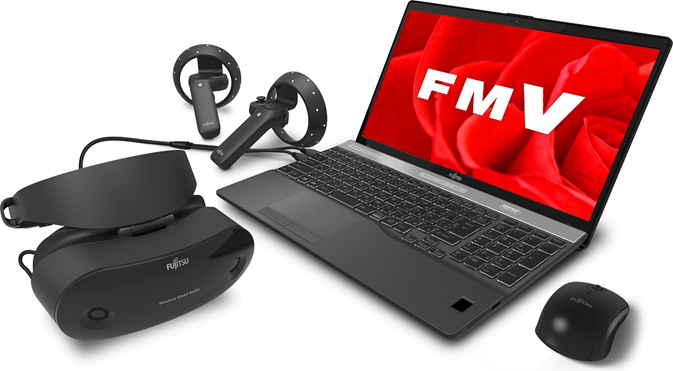 The “Fujitsu Win MR” offers the usual specifications with dual LCD displays at a resolution of 1440 × 1440 pixels and with a maximum refresh rate of 90 Hz. The foldable headset is furthermore supplied with the standard motion controllers.

Only regarding the design, the Japanese goes its own way as the “Fujitsu Win MR” is indeed a stylish and nice looking piece of hardware.

To help you enjoy the full Windows Mixed Reality experience instantly, Fujitsu is also introducing a new laptop from its own FMV series. The “Fujitsu FMV LIFEBOOK AH-MR/B3” is powered by an Intel Core i7-8550U CPU and has a 15.6 inch HD display. There is no information about the GPU installed. But you can expect the “Fujitsu FMV LIFEBOOK AH-MR/B3” to provide good performance, as the “MR” in the name refers explicitly to the “Mixed-Reality” usage and is advertised with the fact that the user can enjoy the Mixed-Reality Experience in Ultra mode. The only special feature: The “Fujitsu FMV LIFEBOOK AH-MR/B3” comes with a pre-installed “CyberLink Power Media Player MR”, with the extra name-tag “for FUJITSU”. A release outside Japan is planned for the US market. Fujitsu will offer the headset including controllers and laptop in a bundle, but also the headset in combination with the controllers separately. Whether the Fujitsu devices will make it to Europe is still unclear. Within Japan, the above-mentioned devices can already be pre-ordered via Fujitsu, and will be delivered from 16 November.

Microsoft held an event on Oct. 3 to announce its plans for the upcoming Windows Mixed Reality head-mounted displays (HMDs). Like it promised, the company revealed pre-order details for the headsets at its San Francisco showcase. Partner devices from Lenovo, Dell, Asus, and Acer will release soon, and all will use the Windows platform.

Samsung has also joined the HMD party with its own Windows Mixed Reality headset. Called the Odyssey, the device is an OLED head-mounted display with 1440 x 1600 pixels per eye resolution. Adding up to 2880 x 1600, this is an improvement on the 1440 x 1440 resolution of existing Windows MR headsets.