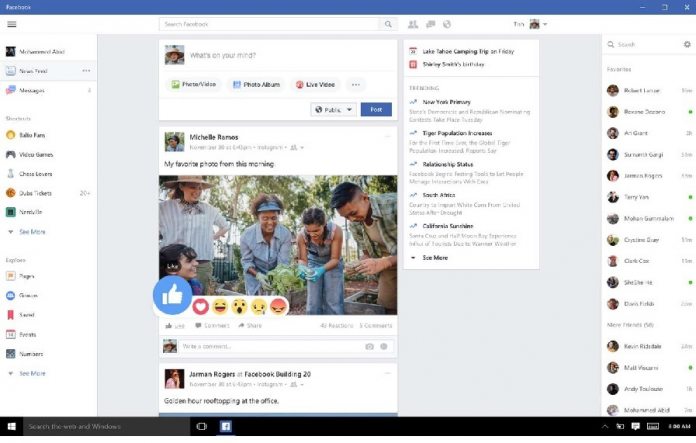 For those who use Facebook for Windows, the app has been given a new update. The application now shifts to version 140.1118.22941.0 and comes with new features. Also, the social network has added support for Jump Lists to the Universal Windows Platform (UWP).

Many of the new features coming to the Facebook for Windows have already made their debut on the Facebook Beta service.

However, most of the new additions are routine improvements, rather than interesting new abilities for users. Either way, Facebook has issued a changelog for version 140.1118.22941.0:

The standout change announced today is the Jump Lists to UWP. This will certainly appeal to users of the app as it allows them to interact with the network without opening the app. For example, users can update their status or search the app.

This can be achieved by right-clicking on the application icon on the taskbar to Start Menu. A menu drops down offering various tasks that can be performed outside the app.

It seems like this feature has plenty of room for growth. Facebook could add more abilities to the Jump Lists feature, making the app more interactive with Windows 10.

It is worth noting that this is a rare update for Facebook on Windows. The company focuses on updating its services on other platforms. Unfortunately, the Windows 10 application is not much liked on Microsoft’s service.

Facebook is a poorly reviewed app on Windows 10, with the focus of people’s ire mostly revolving around crashes.