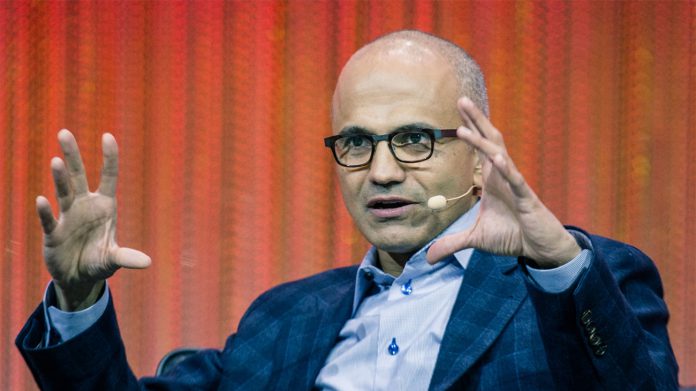 Microsoft CEO Satya Nadella has laid criticism on the closed nature of app stores and pushed for a more open future. Echoing previous sentiments, he said that artificial intelligence needs to be open and collaborative, pointing the finger, it seems, at Apple.

“When I look at PC ecosystem, it’s a very open ecosystem. This entire App Store and all the things around it is a very closed system,” he told reporters in London. “So the more we can create interoperability at least … just imagine if the web was as closed as these app stores. it would be a real tragedy. I hope in the AI world we have an open ecosystem, and we will push for that.”

Of course, the main example of this thinking is Microsoft’s partnership with Amazon. The two services will have inoperability, each able to communicate with the other.

“The fact is, we have great capability and I want to make sure it shows up everywhere people want to interact with it,” added Nadella. “If they have an Echo, they want to invoke Cortana on their Echo, we want to open it up. It’s the same philosophy that led us to build our apps so they were available on iOS and Android.”

Not Free from Blame

To some, however, Nadella’s word will ring as hypocritical. The company has been criticised many times in the past for its closed nature. Historically, Microsoft hasn’t been pro open-source or a big fan of Linux.

It’s clear that Nadella has been changing that, but some there are also more recent accusations. Last year, Epic Games co-founder Tim Sweeney accused Microsoft of “locking down the PC ecosystem.”

His criticism surrounds Microsoft’s handling of its UWP platform. Able to run on any ecosystem, it denies contains features unreachable for regular applications. In return, he says, developers have to distribute their apps on the Windows Store.

However, Microsoft has since pointed out that any store can legally distribute UWP apps, but they choose not to. No doubt the debate will continue for many years.

Another debate, however, may arise due to the return of the company’s Tay bot. Last year, its Twitter bot went out of control, spewing racist and sexist tweets. This time, Microsoft has promised big changes.

“On the Twitter channel [Tay] was attacked, and therefore what happened was it started learning from the attacks and spewing out comments which were not acceptable,” said Nadella. “So one of the things it has really influenced is our design principles…we have to take accountability. Now we’re launching it again, it’s in preview in a couple of channels. So we’re being much more deliberate in that process.”