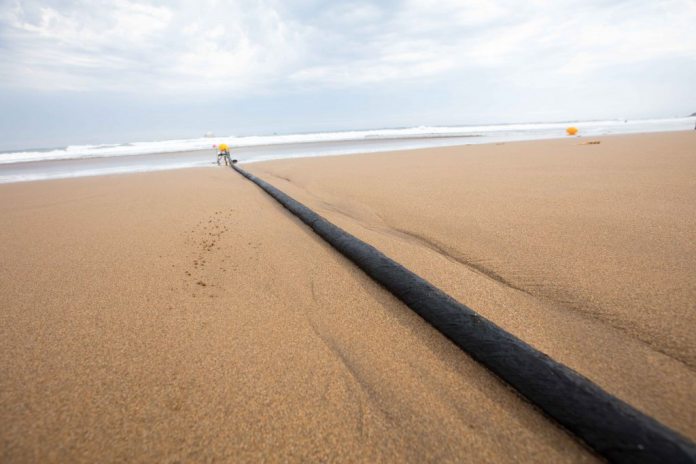 A joint project by Microsoft, Facebook, and Telxius has led to completion of the world’s fastest subsea Atlantic cable. The cable connections U.S. Virginia to Spain, and can carry up to 160 terabits of data per second.

According to Microsoft, that’s enough to stream 71 million high-definition videos simultaneously and is 16 million times faster than the average home connection. Dubbed Marea, the cable lands in Bilbao, providing easy paths to hubs in Asia, the Middle East, and Africa.

“Marea comes at a critical time,” said Microsoft president Brad Smith. “Submarine cables in the Atlantic already carry 55 percent more data than trans-Pacific routes and 40 percent more data than between the U.S. and Latin America. There is no question that the demand for data flows across the Atlantic will continue to increase and Marea will provide a critical connection for the United States, Spain, and beyond.”

The cable will help to meet the demand for cloud services and was designed to scale as internet usage grows.

“All of these applications, especially everything that is driven by video, consume a huge amount of bandwidth,” explains Texius COO Rafael Arranz. “So everybody needs to be connected with a high-volume, high-bandwidth infrastructure. With its unique route, this cable is going to be able to absorb and deliver back-and-forth traffic to strengthen communications, not just across the Atlantic, but across the globe.”

The project, from design to completion, took just two years, close to three times faster than traditional subsea cables. It features eight pairs of fibre optic cables encircled by copper and finished with a protective layer and waterproof coating.

Those precautions will pay off in full, with an average depth of 11,000 feet and a route bypassing active volcanoes, earthquake zones, and coral reefs. It’s seen as a vital step in improving internet infrastructure following the damage by Hurricane Sandy.

The cable’s full operation is expected in early 2018 and could set a precedent for future work by private companies.