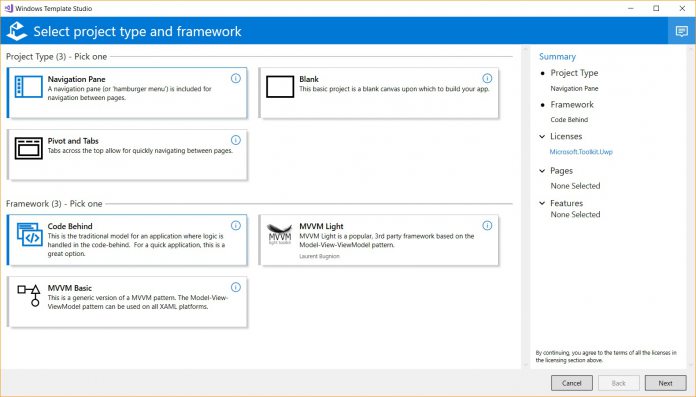 Launched in May, Windows Template Studio is a new service specifically for developers of Universal Windows Platform (UWP) apps. Dev’s can create new applications more easily thanks to a wizard that guides them.

The open source tool highlights pages, frameworks, and features through a four-step process. UWP apps can be created more quickly and efficiently. Microsoft developed the Template Studio as an evolution of Windows App Studio.

With version 1.3 of the studio, Microsoft has added a new scheme to launch apps. Additionally, a default Windows theme has been added to the template, while accessibility has been “drastically improved”.

Microsoft has not said specifically what changes have been made and how users will notice the difference. If you are a developer, let us know how Windows Template Studio 1.3 is performing compared to before.

In its announcement, the company also discussed its future plans for the service. Microsoft expects to add Fluent Design to the template in a future build. You may remember this is the company’s modern design language for the Windows 10 ecosystem.

Also coming soon are Ink templates, Visual Basic support, and localization in the wizard. As for the current build, these are the changes being made through version 1.3:

Improvements to the Wizard: