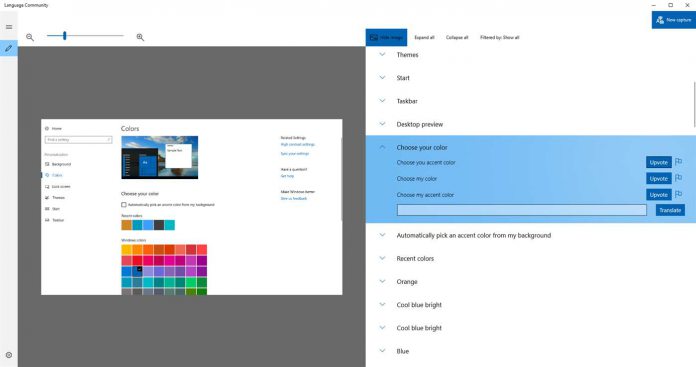 Microsoft has released a new Language Community app to give Windows 10’s users a bigger say in its translation. The decision comes after many months of feedback from the Insider community, who have highlighted problems with some languages.

Though some would question the company’s choice to use its users rather than professional translators, it has put considerable effort into this niche app. You can capture screenshots of poor translations, post suggestions, and vote for the best ones.

After taking a screenshot, you can select any text and suggest and write your suggestions in the box. It applies to all Windows UI elements and even the Skype app.

Despite this, there are a still a few issues with Language Community, and that’s probably why it’s Insider only. Currently, you can’t copy and paste original translations, making it time-consuming. There can also be issues selecting context menus and other text.

Technically, though, this isn’t a full release, so nobody is expecting perfection. Microsoft describes the app as such:

Language Community supports an impressive 96 languages, and no doubt fixes and more additions will come. It’s essentially free labor, but it will also give users accurate translations in a much more timely fashion.

You can download Language Community from the Windows Store today on Fall Creators Update build 16232 and up.