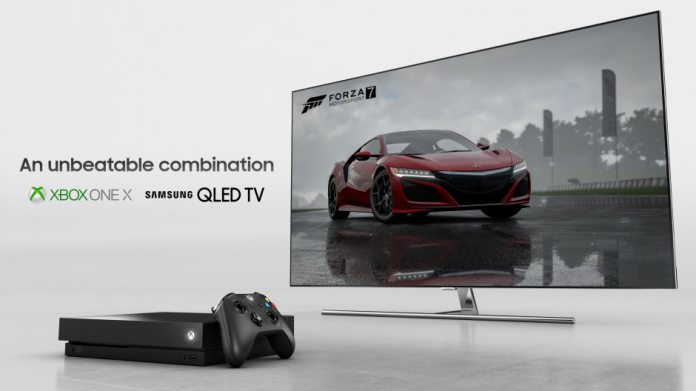 Microsoft has partnered with Samsung to promote its flagship QLED 4K TVs alongside the Xbox One X. The two will promote each other’s offerings at various events to ensure games find the best experience possible.

“Xbox One X will bring true 4K gaming to console players for the first time with 40 percent more power than any other console,” said Xbox corporate vice president Mike Nichols to Xbox Wire. “We’re thrilled to join forces with Samsung in the U.S. to deliver immersive 4K gaming experiences to our fans.”

It’s not the first time the two have collaborated. In February, Samsung decided to pair up with Microsoft for its new Galaxy Book. In 2015, Microsoft promoted the Galaxy S6 in return for pre-installed Office 365.

Thankfully, The QLED TV has several features useful to gamers, including HDR functionality, quantum dot technology, and 3-step image processing. More important, however, is input lag, which is under 20 milliseconds.

Though many PC monitors are faster, it’s one of the best when it comes to 4K TVs. Players should notice more responsiveness, and could even have a competitive advantage over others.

As another component of the partnership, Samsung will add Smart Hub support for the Xbox One X. QLED TVs will automatically recognize it and set up the Samsung One Remote. Users can then say ‘Game Mode’ and their TV will automatically optimize for gaming.

Finally, Microsoft is touting Samsung’s new ‘invisible connection cable’, which lets users place their Xbox elsewhere in the room via a single optical connection to the TV.

“The arrival of true 4K UHD gameplay on the Xbox One X this Fall gives gamers the perfect reason to upgrade their television,” said Eddie Combs, Vice President of Marketing for Samsung Electronics America. “If gamers are looking for a TV that delivers premium 4K HDR picture quality with industry leading design and smart functionality, then the QLED TV and Xbox One X are an unbeatable 4K gaming combination.”

Samsung’s new QLED lineup is available in the US today on its official site. Despite the partnership, it won’t be bundled with the Xbox One X.