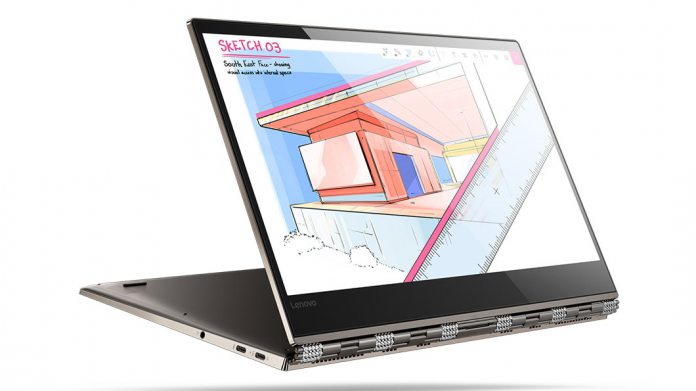 Lenovo will announce its new Yoga 920 laptop at IFA in Berlin tonight. However, ahead of its launch, the device has been leaked, showcasing a sleek design and topline specs. This is the latest in a series of devices aiming for Microsoft’s Surface Book. While we discussed the Acer Switch 7 Black Edition as a Surface Pro competitor yesterday, Lenovo’s latest targets the Surface Book.

Like Microsoft’s product, the Yoga 920 blends bleeding edge specs with luxurious design. The result is a high-performance premium device that will undoubtedly have the price tag to match. German outlet WinFuture already published some exclusive screenshots and specs of the upcoming device. As spotted by one Redditor, Lenovo has already put the full product page online which can be accessed here.

The 13-inch 2-in-1 device comes with a 4K touch screen. Lenovo wants this high res display to be the focal point and the company says the screen is almost bezel-less (5mm on the vertical side). When in its converted tablet mode, the sense of an all-screen look is apparent.

In terms of raw power, the Lenovo Yoga 920 should compete with the best alternatives in its market. The company has also bundled in its Active Pen 2 stylus. This is something we see most manufacturers go with, bringing added functionality to a device. Lenovo is talking up the performance of the Active Pen 2. With 4,096 levels of sensitivity, the company says there is twice the accuracy compared to rival’s, including the Surface Pen.

As this is a Windows 10 machine, Lenovo is also highlighting how the Active Pen 2 works with Windows Ink. Microsoft’s inking tool lets users draw and note take across Windows 10. This includes writing on maps, syncing notes, and posting on videos.

Naturally, Cortana is baked into the Windows 10 experience, but with the Yoga 920, Lenovo believes it can bring more functionality to the voice assistant. The company says the new laptop can sense voices from 4 meters away, allowing Cortana to become more of a smart room management assistant.

The Lenovo Yoga 920 is also one of the frontline laptops pushing Microsoft’s Windows Mixed Reality platform. Virtual and mixed reality experiences come to the Yoga line for the first time. By using the Lenovo Explorer headset (or another headset), users can explore 360-degree content, and play MR games.

Microsoft blazed a trail with its Surface devices, showing that Windows machines could match Apple’s in terms of premium look and feel. We have seen companies like HP and Dell run with this idea, but perhaps Lenovo has pushed this design importance more than most.

The Yoga 920 is certainly a very good-looking machine, even if aesthetic is ultimately objective. Aside from being a pretty face, Lenovo says there is genuine purpose behind the good looks.

For example, the polished CNC aluminium allows the device to look and feel great, but it also brings durability. Lenovo points out that the aluminium has been constructed to weather the rigours of day-to-day use. When the laptop is available, it will come in copper, bronze, and platinum.

As a 2-in-1, a core experience of the Yoga 920 is its convertibility from laptop to tablet. To achieve this, the company has used its proprietary watchband hinge. Aside from being functional, the hinge adds a unique design aspect to the device.