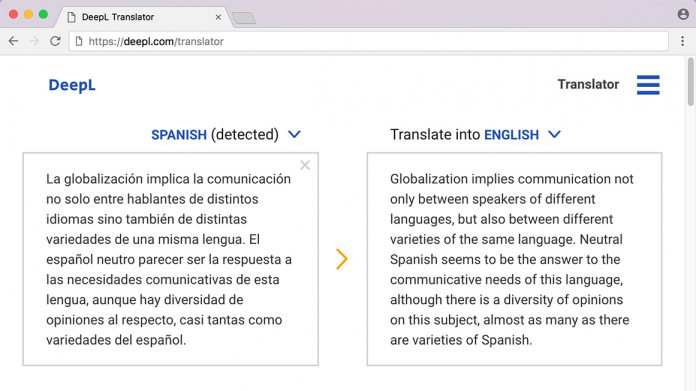 For a machine, Google and Microsoft’s translators are impressive, but they’re still far from human level. They make mistakes, phrase things awkwardly, and are generally an annoyance to language teachers around the world.

DeepL seeks to change that, combining a supercomputer with “a breakthrough in neural machine translation,” to achieve results translators prefer by a factor of 3:1. Its AI can allegedly capture slight nuances in language unreachable by any other service.

It also wins out in some automated tests, with a record BLEU score of 31.1 in English-German and 44.7 in English-French. Google’s previous 2014 score for German was 28.4. According to CEO Gereon Frahling, much of that is down to improvements in neural network architecture.

“We have achieved several significant improvements,” he explains. “By arranging the neurons and their connections differently, we have enabled our networks to map natural language more comprehensively than any other neural network to date.”

To handle that kind of infrastructure, DeepL has a super computer in Iceland. Running off cost-effective renewable energy, it can achieve up to 5.1 petaflops, translate 1 million words per second, and has been trained on a billion translations.

Those translations are sourced by a previous project of DeepL’s, Linguee. Dubbed ‘the world’s largest translation search engine,’ it has over a decades’ worth of high-quality material at its disposal.

As such, DeepL Translator already supports 42 language combinations, including English, German, French, Spanish, Polish, Italian, and Dutch. As we speak, the AI is working on languages like Japanese, Russian, and Mandarin.

In the coming months, DeepL plans to release an API, making its translations available to digital assistants and language learning apps.

Professional translators are both amazed and also worried by the translation quality offered by DeepL. On Proz.com, a language portal for translators, Michael Mangelsdorf, a Germany-based translator, has started a discussion of the new tool:

“As a full-time freelance translator, I am fascinated but concerned by this tool and would like to invite discussion of it, in preparation for the inevitable API that Linguee will certainly develop for the service in the short term, and which will bring it in direct competition with human language service providers. Since the tool translates sentences almost instantaneously, given available hardware, it may soon also affect interpreters. The speed and quality also allow for abuse of course, as much of the output can easily be passed off as native copy, even without post editing.”

Some forum members point to possible privacy issues when DeepL is used for professional translations where confidential text is handed over to the new tool. As DeepL clarifies in its privacy policy, the system requires to store and analyze translation input for further improvement.

DeepL however offers an opt-out feature in its privacy-section where users can avoid the creation of pseudo user-profiles based on tracking cookies and by that the storage of translation-input on the DeepL-servers. From Google to Linguee to DeepL

DeepL is based on more than 10 years of experience in the field of translation. CEO Gereon Frahling, a former Google Research member startet working on a search engine for translations already back in 2007 after leaving Google. Together with his partner Leo Fink they developed crawlers and different machine learning systems for checking translation quality which resulted in the launch of Linguee in 2009. Linguee, which still is available, works as a search engine which shows a long list of results for the input text in which you can see how others have translated a certain phrase. In 2010 Linguee was expanded to more language combinations and hit a milestone of one million monthly visitors, making it the world´s most widely used dictionary website. Today, Linguee has more than 200 million visitors per month.

Work on DeepL started back in 2014 when Linguee began to add machine learning tools to learn from its huge database of high-quality translations to nurture a new automated translation system. To improve the translation quality the company recruited hundreds of professional lexicographers who check and correct content generated by algorithms. In 2016 Linguee starts working on a neural network translation system which is the core of the new DeepL translator.