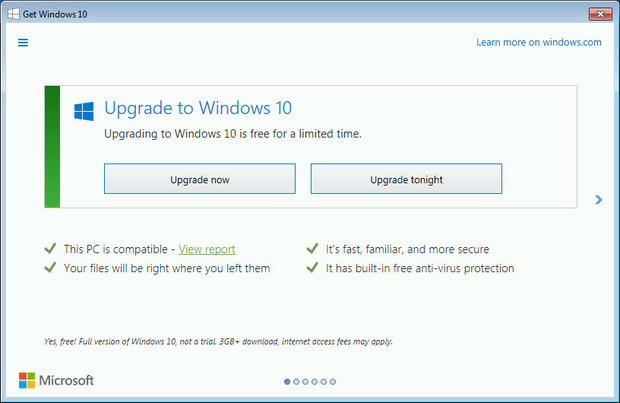 Microsoft Germany has agreed to honor a cease and desist complaint surrounding its Windows 10 upgrade practices. The dispute was first filed by the consumer rights center in Baden-Württemberg, and experienced 18 months of delays.

The Redmond giant lost twice in court and decided to throw in the towel rather than making a third and final appeal. As a result, it will no longer download upgrade files without the user’s consent.

Previously, Windows would download up to 8GB of files in the background, without asking. The shady practice was supposed to make it easier to users to upgrade to Windows 10. In reality, Microsoft blew through user’s data caps, increased users ping, and took up hard drive space.

“We would have wished for an earlier introduction, but the levy is a success for more consumer rights in the digital world,” said Cornelia Tausch, head of the consumer rights center. “We assume that Microsoft and other software manufacturers will pay more attention to the procedure which is not negligible.”

Despite this, it’s still unclear if such restrictions apply to Windows 10 feature upgrades, which roll out twice a year. In most cases, those files download automatically in the background, with no setting to disable them entirely.

Instead, users who don’t want updates have to disable certain services manually, which can negatively affect other parts of the OS. I’m no legal expert, but makes a look at Microsoft’s waiver:

“Microsoft will not download install files for new operating systems to a user system’s hard disk without a user’s consent.”

To me, that suggests it will only make the change for Windows 10 upgrades. The statement only mentions new operating systems, not changes to existing ones. Windows 10 is supposed to be the company’s last OS, so make of that what you will.

Now we just have to wonder if this will impact the various U.S. lawsuits.

JEDI: Judge Says Amazon Is ‘Quite Likely’ to Prove the Pentagon Made a Mistake in Its Cloud Contract Evaluation