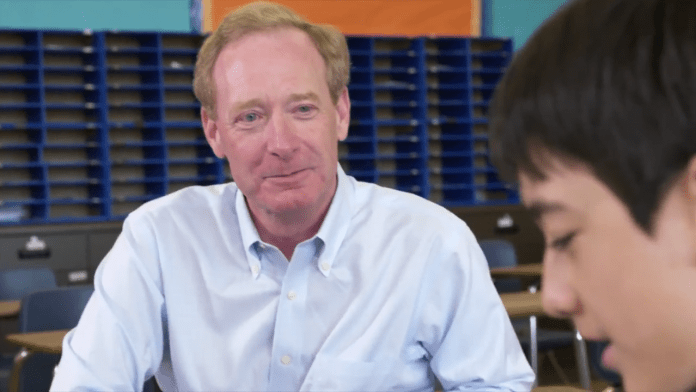 “I know this letter won’t be opened by you on the spot, as I’m sure you guys get millions of letters. I bet whoever is getting this letter, whether it be your secretary or whatnot, is probably just throwing this away or something like that,” said middle school student Sky Yi when he wrote a letter to Microsoft Chief Legal Officer Brad Smith.

The student at Silverland Middle School was advised to write a letter to his favorite company, and he chose Microsoft. Luckily for him, the letter made it all the way to Smith’s desk, who traveled out to meet him.

In a video documented by Microsoft, Smith, Yi read out his letter, which notes “Of course, I picked Microsoft, since you guys manufacture every spoiled, squeaky little teener child’s favorite thing, the Xbox.”

The Microsoft executive then surprised the student in his classroom, who was noticeably giddy when Smith pulled a brand new Surface Laptop.

Smith also responded to the letter in kind by stressing the importance of middle school education.

“At Microsoft, we’ve been working with middle schools for a long time, especially on subjects like middle-school math,” he said. “Because what we’ve learned, what the country knows, is that middle-school math is a game changer. If kids make it through seventh- and eighth-grade math, and they succeed, they’re almost certain to keep succeeding, they’re almost certain to graduate from high school. And one of the things that makes this story exciting, is that this is a middle school that clearly has some great math teachers doing really creative work, drawing kids in, helping them not just learn to count and focus on things like algebra, but showing how math has a real-world impact, and as schools are finding out across the country, that makes all the difference.”

While clearly part marketing tactic, it’s hard to deny the sweetness of Smith’s visit, or Microsoft’s recent dedication to education.