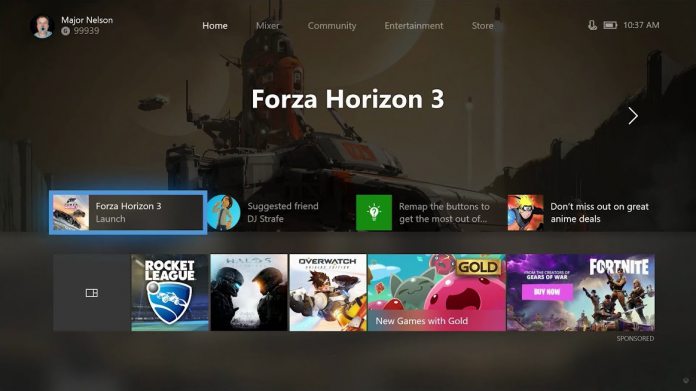 We’ve been hearing a lot of hints about a UI redesign on the Xbox One recently, and today Microsoft confirmed that. An Alpha Ring update revamps the homepage, guide, and activity feed.

Home is the biggest improvement of the three, with has a heavy focus on personalization. It brings Microsoft’s Fluent Design System to the console, but it also lets users tweak what they see on it. You can now add ‘blocks’ to your homepage which can include things like Game Pass, Friend information, and news about a specific game.

Users are also able to pin the games they care about straight to the home page, similar to applications on the Windows 10 Start menu. All of these new elements can be moved and customized at will to make the most important ones display first.

Less immediately noticeable but also huge is an update to the Guide menu. The various tabs are now presented in a horizontal fashion across the top, letting users quickly switch between them with bumpers, thumbstick, or the d-pad.

It also adds a layered effect within that, introducing flyout tabs so you can see content more quickly and get right back to where you came from. The idea is to keep people in the game but also give them to tools to communicate and interact quickly.

Speaking of, Microsoft is also revamping the community portion of Xbox. A new activity feed layout shows more information, whilst also presenting a full-screen view. This lets players read far more comments at once, and also lets you see videos and screenshots how they were captured.

Additionally, Game Hubs, Clubs, and Profile have had their own refresh. As well as a new look, Microsoft is making improvements to Club discovery and will be adding new titles to Arena soon.

However, there’s also a small change for PC users in this build. Microsoft is adding more options for its Game Mode option, which lets you optimize your PC for gaming performance. The Game Bar now lets you enable or disable the feature on a per-game basis, while Mixer recording and network troubleshooting settings have also made an appearance.

All of this should launch with the Fall Creators Update, which will likely release sometime in November. It will also roll out Fluent Design to the PC, creating a unified experience.