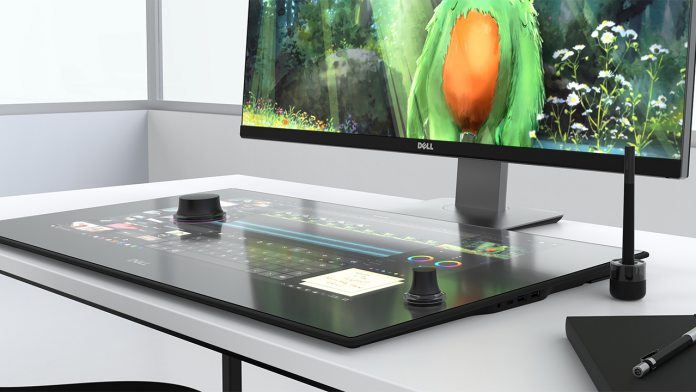 There’s no doubt that the Surface Studio is a marvel of design and engineering, but that also makes it incredibly expensive. It will set you back $3,000 just for the base model, with the i7 2TB model weighing in at $4,200.

Similar complaints have been made about Wacom’s Cintiq line of tablets, which are around $2,400. Dell is looking to capitalize on a more affordable market, but there are some adjustments.

For a start, the 27-inch Dell Canvas isn’t its own device but lies at a 10-degree angle in front of an existing display. You can optionally go up to 80-degrees, but that will cost you an extra $500.

However, the Canvas does have some very redeemable features. It includes a peripheral very similar to the Surface Dial, the totem. Like Microsoft’s offering, it brings up contextual menus and lets you easily switch between tools.

The display is also impressive, though admittedly not as high resolution as the Surface Studio. It presents a 2560×1440 Adobe RGB panel with Corning Gorilla Glass and an anti-glare coating. It supports up to 20 simultaneous touch points and intentional large bezels to rest your hands.

By pairing it with any Windows 10 PC, you can have a multiscreen workflow and, importantly, won’t be tied down to specific hardware. The ability to act as a peripheral means that artists can update their machines independently to keep in line with the latest hardware requirements.

If you already have a good computer, the Dell Canvas starts to sound like a pretty good idea. It’s powered by Wacom EMR technology, which means the pen functionality should be comparable. It also integrates custom software that lets you better organize your Windows 10 desktop and create floating tool panels.

You don’t’ have to wait, either, because the Canvas is available today from the official website.