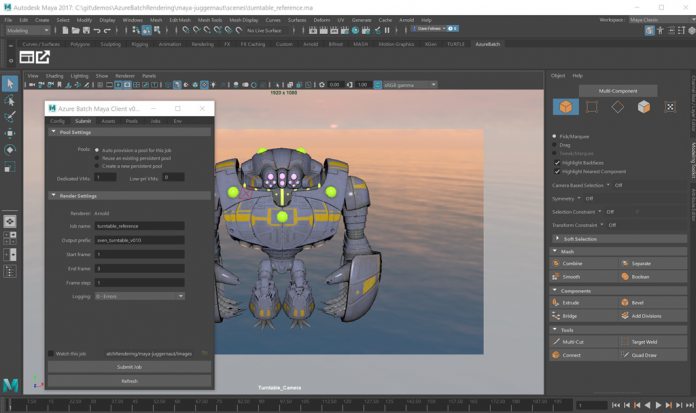 Microsoft has today announced Azure Batch Rendering is moving to public preview. The company announced the availability as part of its SIGGRAPH 2017 event. Batch Rendering was first introduced back at Build 2017, a service that allows users to integrate high-end graphics through Azure cloud.

In a blog post today, Microsoft explains how cinematic productions, associated workflows, and infrastructure show the power of Azure.

Until now, Azure Batch Rendering has been in limited preview. During that time, Microsoft says it has seen plenty of interest and implemented changes from feedback. Now the service is more widely available in full public preview.

Microsoft also announced V-Ray is moving into limited preview. A collaboration between Azure and Chaos Group. Additionally, the company says it will work with its partners to further enhance Azure rendering abilities:

“Azure will continue to work with Autodesk, Chaos Group, and other partners to enable customers to run their day to day rendering workloads seamlessly on Azure. Batch Rendering will provide tools, such as client plugins, offering a rich integrated experience allowing customers to submit jobs from within the applications with easy scaling, monitoring, and asset management. Additionally, the SDK, available in various languages, allows custom integration with customer’s existing environments.”

Furthering its Batch announcements, Microsoft also unveiled Batch Labs. This new management application works across platforms as a desktop app. Among its features are job submissions and monitoring tools.

Batch Labs also features a marketplace with supported apps that can be integrated into applications and workflows.