We think it’s safe to say that E3 2017 belonged to Microsoft. Not only did the company announce the Xbox One X console, it also dropped some massive news regarding Minecraft. Namely, 4K gameplay and cross-play functionality.

Developer Mojang says that the company remains in talks with Sony about bringing cross-play to the PlayStation 4.

Cross-play allows players across platforms to play Minecraft with each other. Cross-play is surely the future of multiplayer gameplay. Microsoft with Minecraft is among the first major companies to embrace the idea. Cross-play works across Nintendo Switch, PC, and mobile editions of the game.

However, there was one gaming giant missing from Microsoft’s announcement. Sony, the current console market leader decided not to embrace cross-play and introduce it on Minecraft for the PS4. More than that, the company questioned the integrity of Microsoft’s plans and suggested it would make PlayStation Network customers unsafe.

Microsoft naturally hit back and rubbished Sony’s reason as excuse making. It seems like Sony simply does not want to play ball. As we reported yesterday, Microsoft has released the Minecraft Better Together Update in beta.

This is the preview of cross-play functionality and 4K gameplay. The full release will come with the Xbox One X later in the year, but in the meantime, Mojang is working on getting Sony’s support. In a Q&A, the company says:

“Q: Will the new version be available on PlayStation 4 and Nintendo Switch?

A: While we are thrilled to be able to confirm the new version of Minecraft is coming to Nintendo Switch, we are still in discussions with Sony about PlayStation and have nothing to confirm. We would love to work with Sony to bring players on PlayStation 4 into this ecosystem as well.

The stretch of playing across all platforms for Minecraft has been a major goal for the game’s developers and Microsoft for quite some time. With Sony’s initial refusal, Mojang has at least confirmed that PlayStation users will get ongoing content updates even if the cross-play feature isn’t available to them.” 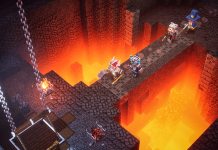