Microsoft Edge is a browser very much in the works. Since Windows 10 launched, Edge has been in a state of live development. This means you probably either love it or hate it. Among Microsoft’s more bizarre practises has been to make Microsoft Edge a closed shop. The browser is locked down to Windows 10, and tightly.

However, there are signs that the company is willing to loosen its grip on the browser. Today, Microsoft took to Reddit to announce the ability to search with Cortana or Google from the right Context Menu. In fact, you can search with “any search engine”.

This may seem a minor adjustment, but it is significant. Microsoft Edge has never previously allowed Google Search to be used in the Context Menu or to even set Google as a default in the browser bar in Windows 10 S. 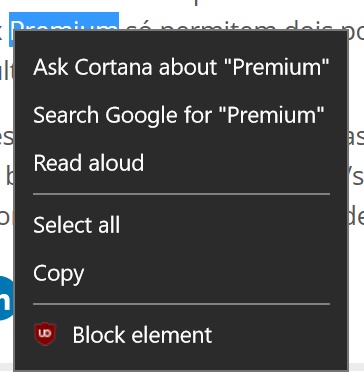 Sure, we like Bing fine, but it is clear the majority prefers Google. The lack of Google Search support limited Edge’s appeal. Microsoft needs to be thinking the bigger picture with its browser, which currently has less than 5% market share.

We have never quite understood why Edge was not developed to be a cross platform service. Chrome has been allowed to steal the browser market partly thanks to the fact it is simply available on all platforms.

So far, Microsoft Edge has been locked down to Windows 10. Perhaps Microsoft is finally loosening the strings and this is a first sign of a push towards cross-platform availability? Wild speculation, for sure, but wouldn’t it be interesting?

With the new update, users can Right Click the Context Menu to search in Cortana, Google, and other engines. It is worth noting some users say they are not seeing this ability yet. Even some Insiders are not getting it. Perhaps Microsoft is testing before a wider roll out, but we’ll update with more information when it arrives.