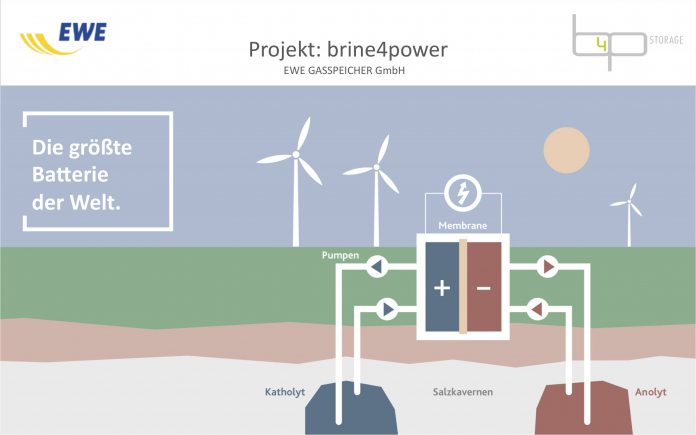 Utility giant EWE AG says it has collaborated with a university in Germany to bring flow battery technology to Berlin. The company will store a massive power cell underground. By using salt caverns that currently store natural gas, EWE AG says it can use the battery to power Berlin for an hour.

Global natural resources will eventually dwindle, but science and technology can pave the way to greener and more efficient power. The German energy company is making strides towards cleaner and longer lasting power.

A flow battery uses chemical energy through two components to dissolve liquids separated by a membrane. The liquids pass electrodes to create energy. There are several ways to implement flow batteries. While they are not self-sufficient (needing a fuel cell or recharge connection) they have almost unlimited longevity and are very efficient.

However, the technology has not advanced enough for them to be viable options for powering large areas. It is hoped development will see flow batteries become more powerful and smaller. EWE’s battery will be the largest cell ever installed, but will only produce one hour of power.

Still, the implementation of the flow battery into the infrastructure of a major city is a big step forward:

“If everything works, this may fundamentally change the storage market, i.e. the market for control energy. The amount of electricity this kind of storage facility contains – consisting of two medium-sized caverns – is sufficient to supply a major city such as Berlin with electricity for an hour. It means that we will have built the world’s largest battery. In contrast to other energy storage facilities that convert the electrical current into other energy carriers – for example into compressed air – we are storing the electricity directly with brine4power,” says EWE GASSPEICHER GmbH Managing Director, Peter Schmidt.

“brine4power” is the name EWE has given to the project. The company says it will use two medium sized gas storage caverns to house the flow battery technology. However, the energy giant also adds that more tests must be carried out and issues clarified before construction starts.

As such, the company predicts that the project will be completed and operational by the end of 2023.

Jena’s Friedrich Schiller University is building the battery in collaboration with EWE AG. Currently the researchers have built a cell the size of a barrel, but will need to go bigger for Berlin’s requirements. The EWE flow battery arrangement will be constructed in three phases:

First the research team will construct and above-ground 10kWh to 40kWh test cell. Next, they will move to a 500 kWh to 2,500 kWh test system, which will also be built above ground. If successful, a pilot battery with a 120MW/750MWh capacity will be placed in the former salt caverns.

Germany has consistently been a revolutionary nation in terms of energy. Indeed, compared to the United States, Europe’s largest economy is well ahead in terms of developing clean and sustainable energy solutions. The country creates record levels of wind and solar energy that goes directly into its grid.

Microsoft Partners with Chevron and Schlumberger to Push ‘Petrotechnical Technologies’