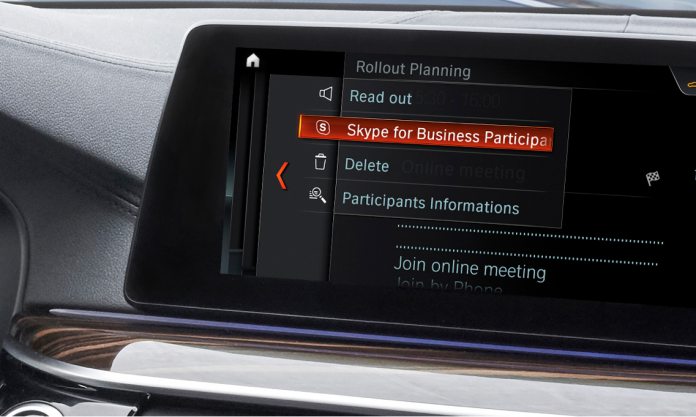 We have recently seen Microsoft make several auto-related moves as the connected car becomes a big sector. One of the company’s existing automobile partners is German company BMW. Today, the marquee brand announced it is collaborating with Microsoft to introduce Skype for Business on its in-car system.

The Skype integration will go live in BMW’s current in-car infotainment system. This will allow Skype for Business users to take and make calls, conduct meetings, and perform other tasks in their vehicle.

BMW adds that it plans to introduce Office 365 communications features in its BMW 5 Series range later this year.

The automotive giant employs an infotainment system called ConnectedDrive. Among the Skype features coming to the system is the ability to join meetings and receive alerts about meetings.

Of course, all the features are accessible automatically, without the need for manual input. Customers using Microsoft’s Exchange will be able to sync their calendars, contacts, and tasks to their vehicle.

“At Microsoft, we believe that cars should be more than just a ride, and also be a personal office on wheels, helping people be productive and giving them time back to enjoy their lives. Our partners at BMW share that philosophy and have positioned the company for a future where the nature of work is more mobile.”

Microsoft and BMW have been collaborating since Build 2016. At the event, the carmaker announced its IoT ConnectedDrive service, which is powered by Microsoft’s Azure.

Skype for Business will come to BMW vehicles in Germany, France, and the UK. The company says it will look to expand to other markets in the near future.

Dieter May, BMW senior vice president, Digital Products and Services, says, “The integration of productivity features in-car (like Exchange and Skype for Business) and personalized and contextual services will help customers with their day-to-day work and planning while they are on the road.”