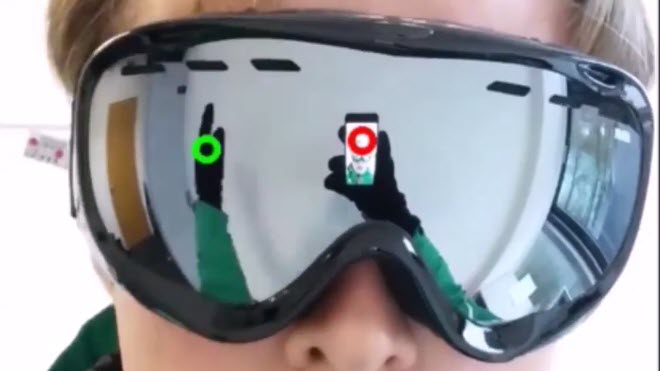 With the invent of touchscreens, OEMs went from creating the smallest phone possible to strike a balance between size and screen-real estate. The result is a constant battle to have large screens but thin devices, accommodating for fingers and thumbs. Still, for productivity, a laptop or tablet is basically essential.

A Microsoft research project could eventually change that. Microsoft senior researcher Eyal Ofek has discovered a way to extend touchscreens beyond their physical bounds. It requires a front facing camera and, interestingly, sunglasses. He calls it GlassHands.

We demonstrate the feasibility and potential of our proposed approach in several application scenarios, such as map browsing or drawing using a set of interaction techniques previously possible only with modified mobile devices or on large touch displays. Our research is backed up with a user study.”

GlassHands seems to work in a variety of environments, including dark rooms, and may even support pens and virtual keyboards in the future. It can also utlizies gestures into thin air for skiing or sports scenarios.

Of course, this is an experimental technology, and it’s possible it will never make it to market. For a start, you can’t wear sunglasses indoors without getting a least a few weird looks.

The technology would also need to be calibrated to the specific curvature of each pair of sunglasses. With some more development that may not be too hard, but a bigger problem could be latency. While Ofek’s demo on Windows Mobile looks promising, it does show a significant slow down on the device.

Whatever the case, it’s great to see Microsoft pushing the boundaries of technology and thinking outside of the box. No doubt the research will prompt further studies and innovations, even if it comes to market it a different form. You find more about the project on the GlassHands Microsoft Research website.