Windows Insiders on the Fast Ring have a new update in the form of preview build 16226. This release is from the Redstone 3 development branch, which is for the Fall Creators Update. A couple of weeks ago, Microsoft dropped Insider build 16215, which was full of new features. This new release is similarly stocked, and makes significant changes.

Indeed, many of the new features are some Microsoft discussed as part of the Fall Creators Update introduction.

Microsoft Edge is a focus of Windows 10 Preview Build 16226. Among the additions to the browser is the ability to migrate bookmarks from Google Chrome to Edge. EPUB improvements continue to be made, such as Copy and Ask Cortana for EPUB reading material.

There are also changes made to the favourites experience and the way in which Edge manages closing tabs.

We have heard a lot recently about Microsoft’s CShell, a redesigning of Windows to allow it to scale perfectly across devices. Such a move would make Windows 10 PC the universal platform across form factors.

CShell is not expected to launch for some time, so Microsoft is still making improvements to the Windows Shell experience. In Windows 10 Preview 16226 enhances the File Explorer and adds a Reveal Highlight behaviour. The latter simply highlights list menu items.

Giving you more control over closing tabs: Building on our work in Build 16199, we’ve updated Microsoft Edge to ensure the X in the tab band is always available to close a tab, even when a JavaScript (i.e. alert, prompt, etc.) dialog is showing within Microsoft Edge. Additionally, closing the Edge window always remains an available option. You can also access many browser capabilities (i.e. favorites bar, settings, etc.) while a dialog is showing. Ink Notes: Got ink? Add a note and write or draw on it with your pen. Books roamed across devices: Your books from the Windows Store are available on your Windows 10 devices, and your reading progress, bookmarks, and notes are kept in sync.

New experience when saving new favorites: You can now view your favorites as a directory tree when you save new favorites, and collapse or expand folders from within the “Add to favorites” dialog. Just click the “Save in” folder list to get started! Edit URL for Favorites: You can now edit the URL of any favorite in the Favorites menu or the Favorites Bar. You can use this to update the location of a site that has moved, or to create Bookmarklets in the favorites bar. Favorite manageability for Enterprise: IT admins can now configure favorites via group policy and mobile device management, including the ability to define and lock pre-configured favorites in addition to the user’s favorites.

Emoji 5.0! We have added support for the latest Unicode updates – including new snacks, actions, dinosaurs, and even fantasy characters like genies, fairies and zombies!

They’re all accessible via both the touch keyboard and the Emoji Panel. Bonus: Along the way, we also updated our emoji pickers to now make it possible to access the profession emoji and gender diverse options for some of our people actions (for example, you can now select male or female face palm).

Finally, we’ve tweaked some of our original emoji designs based on your feedback and to improve consistency with how the emoji is displayed on other platforms (while maintaining our Windows style). Search for emoji in Emoji Panel: We’ve updated the hardware keyboard’s new Emoji Panel to now provide a search feature! After opening the panel via the Win + period (.) or semicolon (;) hotkeys, keep typing! The words you type will be used to filter the emoji displayed. If you close the panel by clicking “x” button or pressing Esc, the words will remain. We’re still working on enriching our emoji keywords – have any suggestions? Log feedback! Note: The Emoji Panel is currently only available when the en-us keyboard is active. Dark theme for Emoji Panel: Do you love dark theme? Because we do ????. If you have dark theme enabled (via Settings > Personalization > Colors), you’ll now see the Emoji Panel background display using dark colors instead of light.

Last week, we released OneDrive Files On-Demand to Windows Insiders running Build 16215 and higher. This is essentially like OneDrive placeholders – but better. This was a highly requested feature from Insiders so be sure to check it out!

Additionally, we wanted to make sure that our customers are in control of all file downloads from the cloud. When they use OneDrive Files On-Demand (or another cloud provider), and an app (like a photo editor) tries to download files that the customer has stored only in the cloud, we’ll show a message displaying: what’s being downloaded, which app is requesting the download, and options to dismiss the message, cancel the download, or block the app from downloading. (We also added a way to unblock apps in Settings > Privacy > App-requested downloads, in case you change your mind.) If you speak any of these languages, please take a moment to try it out and log feedback. If you have anything you can specifically repro consistently, be sure to mention it in the problem report.

Note: For this and the below work to work, the language resources will need to be downloaded. If you upgrade with the language, it should happen naturally, but if you add the language after getting the build, you may need to go to Optional Features and manually download them. If language resources for that language have not been downloaded, then you will see the swipe pattern, but no text will be input into whatever field you’re typing in. In addition, you will not see any text predictions. Text prediction for more languages: We also support text prediction upon your typing on the languages above and more! Please try out your mother tongue with our keyboard!

One-handed curve-flick touch keyboard for Japanese: We’re excited to announce that curve-flick input is coming to the PC! We’ve had this for a while on Windows 10 Mobile, and we know how much you like it, so with today’s build you’ll now be able to use it with the Japanese one-handed keyboard on PC too ^_^. For those who are unfamiliar with it, curve-flick input is an advanced method for quickly inputting Japanese Kana. If you’ve ever used flick input with your phone, please try it out today on your PC and share feedback! (and, if you’ve never tried it on your phone, share your feedback too! We love to hear your thoughts).

Moving with ease: We’ve made some adjustments based on your feedback. First: you no longer need to hold the move icon to move the touch keyboard. We’ve removed that, and now you can just grab anywhere on the candidate pane that doesn’t have predictions, and place the keyboard where you want. Second: when using the one-handed keyboard, you’ll find that the left-most option is now “undocked”. If you use this option, then whenever you relaunch the touch keyboard it will appear back in the location it’d been in before being dismissed.

Paste away: If you have text copied to your clipboard, you’ll now see a clipboard icon in the touch keyboard candidate pane. Tapping it will paste the clipboard contents into the text field with focus.

Shifting up a gear: We’ve heard your feedback, and we’re very excited to let you know that with this build of Windows, you can now use the shift key to cycle between capitalization states – just like on W10M! Other UI and reliability improvements including:

Pen scrolling now works in Win32 apps: Building on what we lit up with 16215, you can now use your pen to scroll in File Explorer and other win32 apps.

Windows Sonic, available in the Windows 10 Creators Update, is now even easier to enable with this update. Plug in a pair of headphones, right-click the sound icon in the notification area, and select Spatial sound to choose your preferred format. You can also configure your 5.1, 7.1, or Dolby Atmos for home theater from this menu if it’s your currently selected default endpoint. You can learn more about Windows Sonic here.

New help options: We have added a new “Xbox Networking” section under Settings > Gaming. Here, we’ll help you attempt to identify and resolve issues preventing you from using voice chatting and playing multiplayer games with other Xbox Live users. Track your GPU performance: For the Task Manager fans out there, we’re happy to share that we’ve heard your feedback and we’ve updated Task Manager to now include GPU info. Our engineering team used the feedback you gave us that is part of this Feedback Collection https://aka.ms/olx5pn to prioritize and to design the feature – thank you! The Performance tab shows GPU utilization information for each separate GPU component (such as 3D and Video encode/decode), as well as graphics memory usage stats. The Details tab shows you GPU utilization info for each process. Please note that this feature is still under construction and you will find issues and bugs, as always please send us feedback in Feedback Hub under Desktop Environment > Task manager. Reveal: The new Reveal Highlight  behavior is an interaction visualization that helps guide users. Reveal is now enabled by default on ListView and other XAML collection controls in experiences that target the Fall Creators Update.

Note: This gif is from our UWP Style Guide, and showcases both the use of Acrylic material, and the use of Reveal. With this update, we are only enabling Reveal by default. 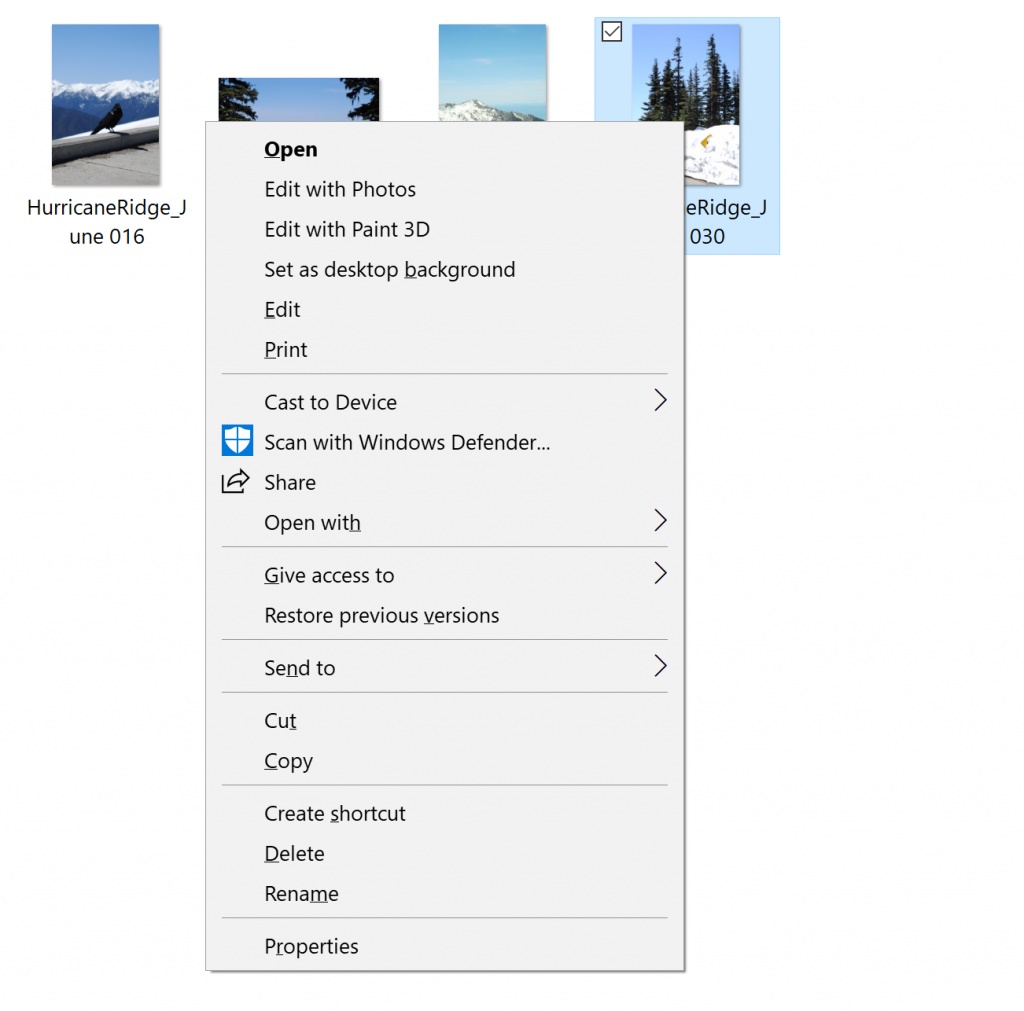 Calculator cashes in with a Currency Converter feature

Since the launch of Windows 10, one of the top customer feedback requests we get is to include a Currency Converter function in Calculator.  Wait no longer!  As of desktop version 10.1706.1602.0 (included with the Fall Creators Update, available for update via store as we speak), you’ll find “Currency” as the top item under the “Converters” menu.  It does most everything you’d expect from a Currency Converter, all expressed within the fresh and shiny Fluent Design System we rolled out last month.  One aspect of the feature that we think is interesting is an offline mode…so if you’re roaming internationally and want to see how much that train ticket or souvenir is going to cost without rolling up extra data charges, we’ve got you covered.  As ever, we value and await your feedback on this new feature, so send us your thoughts via Feedback Hub or Store Review! 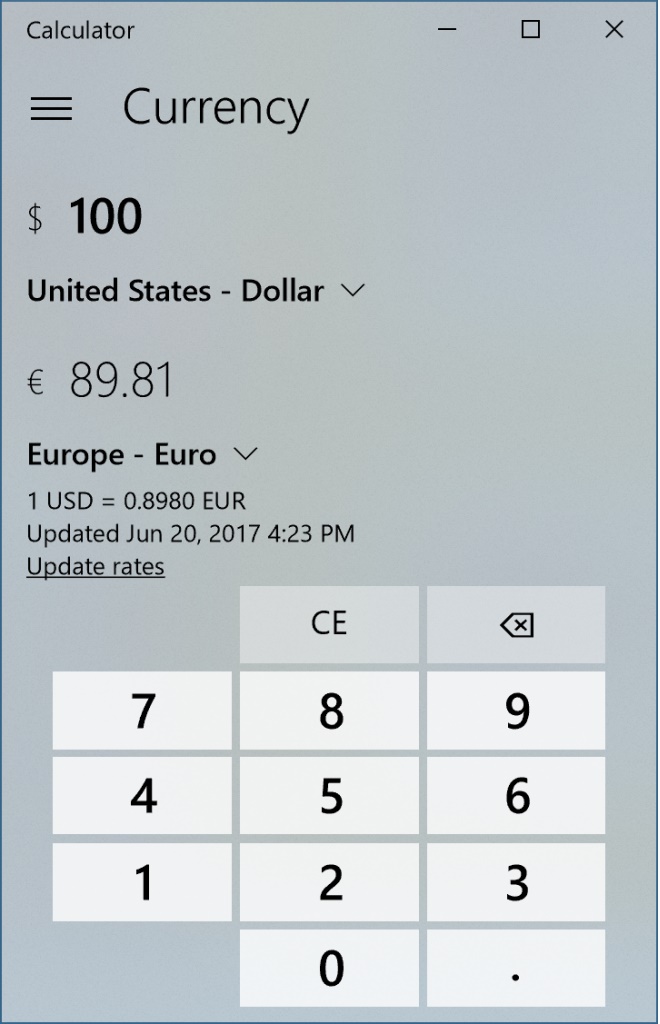 Narrator gains auto-captioning: Narrator can now use artificial intelligence to generate descriptions for images that lack alternative text! The service also includes the ability to extract text from images using optical character recognition. Want to try it out? Turn on Narrator, set focus to the image below, then press Capslock + Shift + D to hear its description. You will need to be connected to the internet for it to work.

Improvements for IT Pros

Windows 10 and SMB1: As part of a multi-year security plan, we are removing the SMB1 networking protocol from Windows by default. This build has this change, however the change only affects clean installations of Windows, not upgrades. We are making this change to reduce the attack surface of the OS. Here are some more details to take note of:

For more information on why SMB1 is being removed, see: https://aka.ms/stopusingsmb1

For more information on software and devices that require SMB1, see https://aka.ms/stillneedssmb1

Hyper-V Improvements: Share your VMs with ease with the new VM Sharing feature! On today’s build you’ll find a new icon in Virtual Machine Connection that will compress your VM into a “.vmcz” file. Double click this file on your destination machine to start importing the VM – easy as that!

More information for Mixed Reality developers can be found here.

Changes, improvements, and fixes for PC