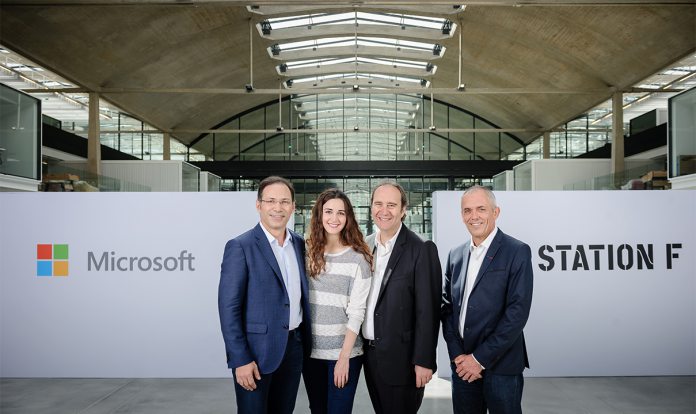 Microsoft has been supporting startups in Paris for a while. Its accelerator in the Sentier neighborhood has been in operation for a good few years, but it now appears the company will go down a new route.

This month, the Redmond giant plans to launch a program exclusively for AI startups in Station F. It’s made possible through a partnership with INRIA and will replace the previous project.

The first startup to join the family is Recast.ai, a startup that helps customers build, manage, host and launch chatbots. It’s something that aligns with Microsoft’s own advancements with Ruuh and Zo, as well as its Bot Framework.

However, Microsoft France developer experience leader Christophe Shaw says, “We don’t plan to invest or acquire startups through this program.”

Instead, the startups will get access to Microsoft and INRIA researchers, as well as free credit on Microsoft Azure.

“We’ve been lucky that Microsoft spotted us from the very beginning of Recast,” said founder CEO Patrick Joubert to TechCrunch. “We’ve been using Microsoft Azure to host our service.”

Being surrounded by other startups also has its own advantages. It helps with healthy competition and spreads the word about clients. Though Recast is the only participant currently, Microsoft has big plans for the future.

“We think that we’re first going to select 5 or 6 startups that can foster an ecosystem around INRIA and themselves,” says Shaw. “The idea is that we’re eventually going to have a hundred startups in this club.”

The Redmond giant will also host events at Station F, including technical presentations and workshops. It will have its own dedicated space and plans to host one each day.

“I firmly believe that AI will play a major role in tackling some of the big global challenges we currently face in healthcare, farming, environment and education. It’s relevant to businesses, governments and individuals in all countries,” says Jean-Phillippe Courtois, president of Microsoft International.

“By helping a new wave of AI-led companies to expand internationally, we further democratize AI and help bring its benefits to more people.”