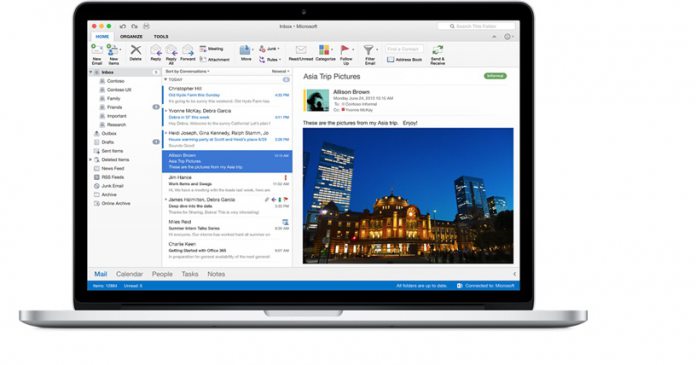 Microsoft has today announced some significant updates for Outlook for Mac. The company is launching several new abilities today, while others are pencilled in for the near future. With the additions, the email service on Mac feels more robust and like Office 365 version on other platforms. Microsoft says user feedback was essential for creating the new features.

For example, customers have been asking for more freedom over sending emails. Microsoft has debuted a Send Later feature for Outlook for Mac. This allows users to compose and email now and schedule it to be sent automatically at a time of choosing.

This is a helpful tool and it lets you choose the date and time when the email will be sent. In the meantime, the email is saved to the Drafts folder and be edited before it is sent. The company says the Send Later is rolling out today for Office Insider Program Fast Ring members. Office 365 subscribers will see it in July.

Knowing whether an email has been received and read by a recipient is important. A new ability in Outlook for Mac brings support for read and delivery receipts. Users can set up the service to give both receipts, or just one.

The receipt support is available to all Office 365 subscribers on version 15.35 and later, starting today.

Continuing the improvement of the email experience, Microsoft has debuted email templates. This saves users from composing a regular email every time. Any email can now be written and saved as a template, allowing for reuse. These template emails can also be edited at any time.

More Features in Outlook for Mac

Syncing with a calendar is hugely important for people who receive multiple emails per day. Outlook will now support calendars with the ability to drag and drop emails from Outlook to the calendar. Microsoft says the subject field becomes the calendar subject, while the body goes into the notes.

Like receipts, calendar management is available today to all Office 365 subscribers on version 15.35 or later.