Microsoft has never officially revealed what sales figures for the Xbox One are. We do know that it has sold less than Sony’s PlayStation 4, but the extent of the deficit is unclear. Microsoft France may have let the proverbial cat out of the bag in a sale history demographic of the Xbox division.

The leaked infographic shows that Microsoft’s current-generation console has sold 36.2 million units. It also shows that the best-selling game on the device is Call of Duty: Black Ops II with 11.4 million units sold.

It is unclear when this data was prepared, but we imagine it was recent. Whether 36.2 million is a respectable number or not depends on how you thought Xbox One was doing. Certainly, there were those who predicted the console was hovering around the mid-twenty million. For those, the console is beating expectations.

However, there is no getting away from the fact that the Xbox One and PS4 launched on an even playing field. We know that Sony’s console has raced away in terms of sales. The reasons for that are many, but Sony confirmed last month that its console has sold 66 million units. 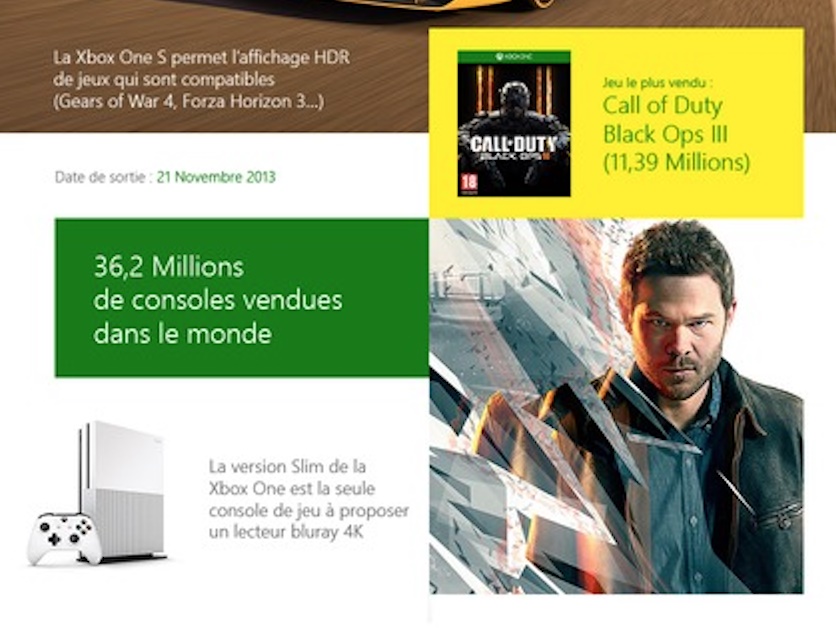 It is clear which company is the winner in terms of sales, and that is unlikely to change. Even if the Xbox One X is an enormous success, it is unlikely Microsoft will catch Sony this generation. Especially because the PS4 continues to sell well and outperform Xbox in some markets.

Microsoft France’s leak seems to be genuine, so we are taking this data as close to official as we are going to get. I predict Sony will be updating us on its PS4 sales soon.

The company’s French division was promoting its “House of Fans” event, which discusses hardware. With the Xbox One X due to launch in November, Microsoft France is preparing for the release by sending out an infographic charting the history of Xbox

Naturally, this starts with the original Xbox. The infographic shows that the OG model sold 24.6 million units. This is impressive considering Microsoft was entering the market for the first time. This was also the peak of the PlayStation 2, a monster-selling success. Halo 2 was the most bought title on the Xbox, selling 8.5 million copies.

Moving on to the Xbox 360, this is where Microsoft’s gaming ambitions really took flight. The console sold 85.5 million unites. While the Nintendo Wii dominated this generation, Microsoft built itself to be the equal of Sony and the Xbox 360 matched the PlayStation 3 in many areas and bettered it in others.

Microsoft’s Kinect was ill-fated for many, but the motion sensor’s Kinect Adventures was the best-selling Xbox 360 title with 22 million units. This makes sense considering it was a bundled game.