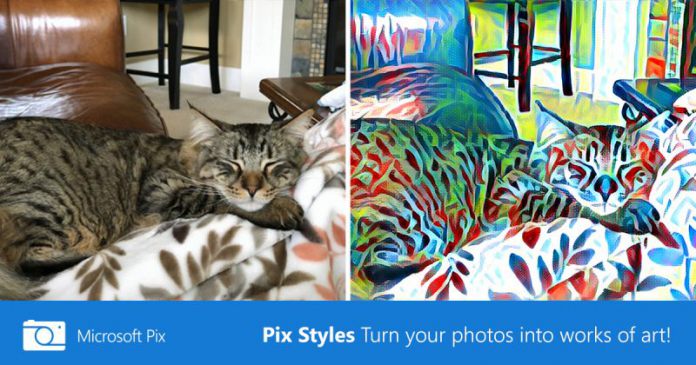 Microsoft’s smart camera app for iOS has today received a significant update. Pix launched last year and has been incrementally updating it since. The latest release brings features to overlay filters on top of photos. These are artistic filters based on real classic paintings, giving users increased stylish layers.

Indeed, the Pix team say they used AI to search datasets of classic paintings to “learn the essence of what makes a given style of painting recognizable”. The result is a feature called Pix Styles, which makes changes to an image and changes them into styles inspired by noted works of art.

Additionally, this feature allows users to add effects to their photos. Microsoft is eager to point out that Pix Styles is unlike normal filters. The company says it is capable of changing textures and tones within an image, resulting in a completely different photo.

Of course, the face or focal point of the image will still be the focus. If you remember, this was one of the key points of Pix when it launched, the ability to make faces look as good as possible.

Microsoft still wants Pix to be viewed as a serious photography app. However, the company also says it has added the new Styles feature to bring some fun moments and to generate more social media interest.

“These are meant to be fun features,” said Josh Weisberg, a principal program manager in the Computational Photography Group within Microsoft’s research organization in Redmond, Washington. “In the past, a lot of our efforts were focused on using AI and deep learning to capture better moments and better image quality. This is more about fun. I want to do something cool and artistic with my photos.”

Paintings is another new feature that create a time-lapse animation on an image. Users ca again choose from artistic styles.

The main function behind the app is the ability to automatically improve photos and create live images. To do this, the app uses artificial intelligence. Sure, iOS already has a similar Live images feature, but Pix brings image stabilization to the party. The service also makes it easier to convert normal videos into Hyperlapse videos.

“Take better photos without extra effort! Microsoft Pix has serious intelligence behind the lens, so it can automatically tweak settings for each shot, and immediately enhance your photos, to help people and scenes look their best. Now you can just enjoy the moment, instead of struggling to capture it! Point. Shoot. Perfect.”