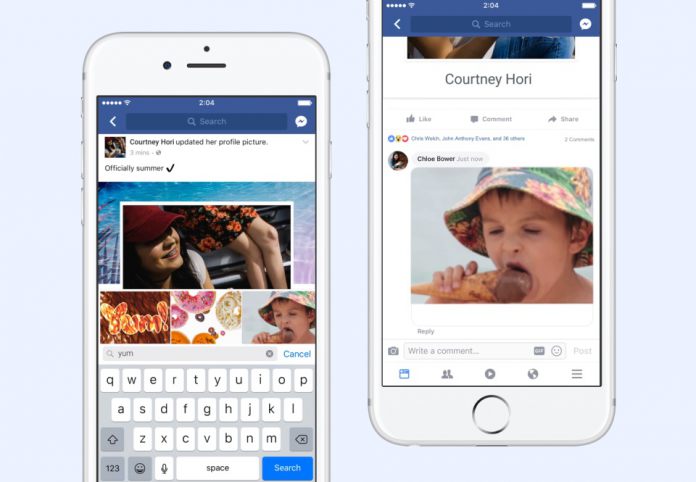 Facebook has introduced the ability to add GIFs in replacement of comment. The feature is among the most requested by users and allows them to react to comments with GIFs. In a press release today, the company says it has been testing the feature for three months.

Facebook decided to launch the ability on Wednesday. This was a perfectly timed launch to coincide with the 30th anniversary of the GIF format.

“We know people love communicating with GIFs on Messenger, and we’re also making it easier to use GIFs on Facebook. Today we’re introducing the ability to add GIFs in comments for all people on Facebook globally,” the company says.

Adding a GIF to comments is easy. Users will see a GIF button on the Facebook comment box. This allows the ability to search for a type of GIF and select which you choose. The social network has teamed with GIF provider GIPHY to create content. These GIFs will be created in collaboration with YouTube stars Logan Paul, DNCE, Amanda Cerny, DREEZY, and more.

In its press release, the company added some details about GIF use on the network. The company says 13 billion were sent in 2016, averaging around 25,000 per minute. Messenger users embraced the GIF in 2016 and tripled the number of GIFs used year-on-year. It is easy to see why this was among the most requested new features.

Late to the Party

Incidentally, Facebook is trying to keep its Messenger service on par with rivals like Slack and WhatsApp. With that in mind, GIF support in comments is a welcome addition.

However, it is worth pointing out that Slack and WhatsApp already have GIF-supported comments. It seems as though there is one limitation with Facebook’s new feature. Namely, users can reply via comment with GIF from Facebook partners. If they want to create their own, they cannot place it in the comments as a reply.

Facebook is obviously trying to maintain partnerships and wants users to tap up Giphy and other collaborators.