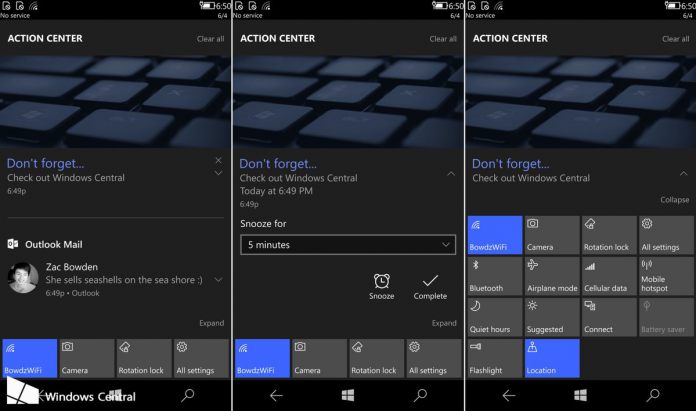 The rumor of a new Windows Shell known as the Windows Composable Shell has been doing the rounds since the start of the year. Microsoft’s recent accidental internal Windows build leak shows Composable Shell, “CShell” in action. This is the first time we see the scalable UI and what it will mean for the Windows 10 platform.

If you are unfamiliar with Windows CShell, it is a scalable version of Windows that adapts the UI to work across devices. While the Universal Windows Platform (UWP) started the convergence of the platform, but CShell is a level beyond.

The idea is for users to enjoy exactly the same Windows 10 experience across all devices. In other words, we are talking about One Windows, built on one branch.

One of the main points of CShell is that it brings the Start experience from Windows 10 PCs to Windows 10 Mobile handsets. For example, this will bring Live Tiles sizes, context menus, and options will all be available.

As well as the Start Menu, mobile users will also get the Windows 10 PC Action Center. All the customizations and options are included, integrated into a smartphones swipe and touch-centric input methods.

Windows 10 Mobile will also become much more adaptive. For example, reorienting the device from landscape to portrait or vice versa will move the entire UI, including Live Tiles. Yes, full Windows landscape mode on mobile. If you have been using Microsoft’s phone platform then this will be a welcome addition.

The good news is that Microsoft is clearly confirming that it will continue to support Windows as a mobile platform. However, the introduction of CShell will highlight some serious issues within Windows 10 Mobile that could mean some users will not want CShell.

Chief among those problems is that CShell will not support Silverlight applications. Of course, apps have been one of the biggest problems for Windows phone. Microsoft has been unable to secure widespread support from large developers.

Some of the giants, such as WhatsApp, have created Silverlight apps for the platform. However, these apps will not be supported by CShell. This means that many users would lose WhatsApp (or other major Silverlight apps) if they update to Composable Shell.

I guess some will be ok with that compromise, but let’s not pretend that WhatsApp is not essential to many users. Whether as a social or work tool, it is massively popular. Simply put, many users will not want to lose the few marquee apps that Windows 10 Mobile has. Silverlight apps may not be amazing, but at the moment they are the only option users have.