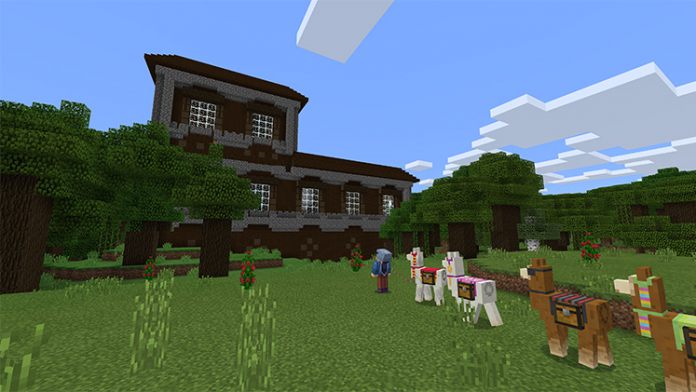 Microsoft has today introduced Minecraft users on Pocket and Windows 10 editions to version 1.1. Most will probably now this release as the long-awaiting Discovery Update. Like all major Minecraft builds, the update comes with a slew of new features and changes to the sandbox building game.

Among the changes are new buildings, maps, animals, and items. For example, gamers on Minecraft Pocket and Windows 10 can now explore the Woodland Mansion.

Other new editions include new blocks (such as concrete), Dyable Beds, Llamas, and enchantments like Frostwalking and Mending. Minecraft is also talking up new Add-Ons, such as the Skyrim Mash-Up Pack.

The big news about the Discovery Update is that it introduces a Marketplace. You may remember Microsoft reported this feature back in April. This is the first time that Pocket and Windows 10 Edition users will be able to access the Marketplace.

Users can access the hub to buy community-created textures, skins, and maps. Mojang says content is single-purchase, meaning you can buy it once and use it across any Windows 10 and Pocket Edition device.

Microsoft said at the time that the emphasis of the Discovery Update is creations. New cartographer maps that have been built with the collaboration of community-known map makers.