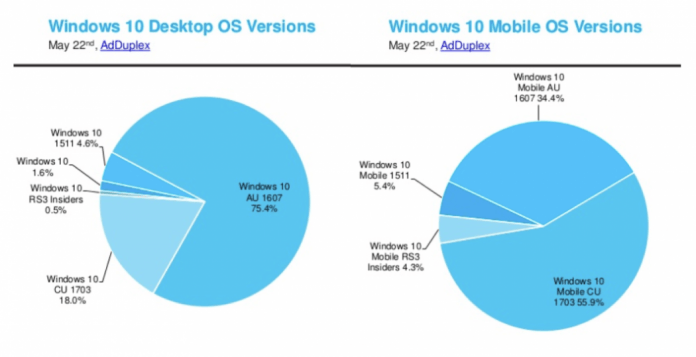 Now that the Windows 10 Creators Update is out in the wild, how has it been performing against older Windows builds? AdDuplex has released its latest Windows Device Statistics Report, and as always it makes for interesting reading. It shows that the Creators Update is keeping pace with the Anniversary Update in relation to adoption and time on market.

If you are unfamiliar with the AdDuplex reporting method, it is not a complete overview. However, it has become an accurate snapshot of the Windows market and device use. The company studies Windows Store app data from application that run the AdDuplex SDK. There are about 5,000 apps with the SDK.

While this is far below the total number of apps in the store, it presents a solid representation of the state of Windows. That, and the fact AdDuplex follows the market on a monthly basis give us a good idea of how many people are using certain Windows builds.

Indeed, AdDuplex shows that the Windows 10 Creators Update already has 18% share. After a month on release, that is a solid number that matches how the Anniversary Update performed. As it stands, build 1607 holds a 75.4% share.

Build 1703 is already on 55.9% of devices, while the Anniversary Update takes 34.4%. This is interesting when we consider the mobile version of the Creators Update dropped two weeks after the PC version.

AdDuplex says the profile of Windows 10 Mobile users is the reason for the increased adoption. The company says “the likely enthusiast nature of most people still using Windows 10 Mobile or much more limited variety of hardware.”