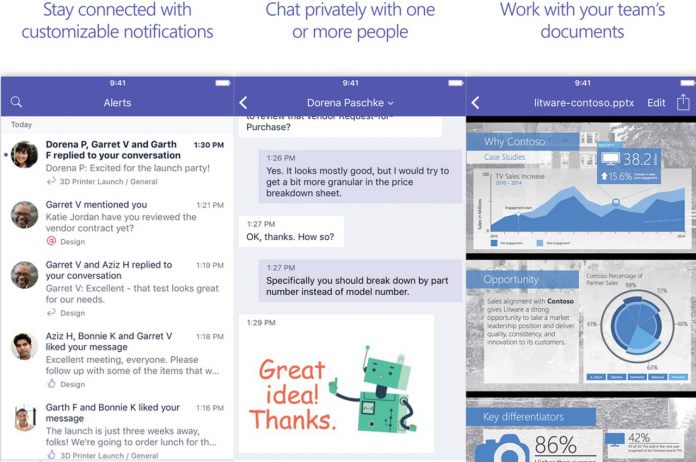 Launched last year, Microsoft Teams has quickly become a potent team messaging/collaboration tool. The platform moved to full release on Office 365 in March and Microsoft has been updating features since. Today, the newest update has bolstered the capabilities of Teams on mobile devices.

Since it launched, Microsoft Team has been more useful on web and desktop. The full experience is not yet on mobile, but the company is working towards adding more features. With the latest update, iOS users have scored an update that came to Android a week ago.

Specifically, version 1.0.13 of the iOS application deals with bringing support for tabs in channels, and several other abilities.

Mobile users can now see and interact with tabs, including the Planner and OneNote apps. Messages are editable, including those with images. You can see the full changelog below:

The OneNote and Planner support is particularly useful. It is still not a seamless experience, however, mainly because opening tabs requires jumping to Safari. Dedicated iOS applications have still not been integrated.

Nevertheless, Microsoft is clearly making strides for Microsoft Teams on mobile platforms. As always, we hope the company will extend the love to its own Windows 10 Mobile OS, which has not yet gained these capabilities.

This week, Microsoft announced that Teams for web and desktop now supports Microsoft Flow. Users can build flows which monitor all activity on social media forums and alert their team about events that they didn’t expect or require action.