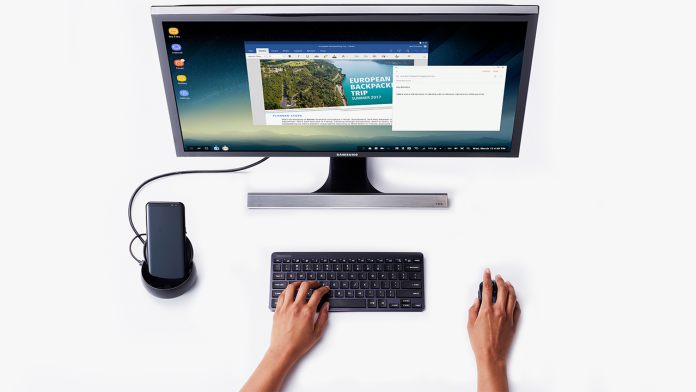 When the Samsung S8 launched this spring, it had a feature very familiar to Windows 10 Mobile users. Similarly to Microsoft’s Continuum, the S8 can power a full desktop experience, but it runs a Linux OS.

That functionality requires an accessory: the DeX station. You plug your S8 into the dock, attach peripherals, and you’re good to go. Except it doesn’t just work with the S8. YouTube user gazcart has uploaded a video showing the DeX dock and a Lumia 950. It seems the underlying technology is so similar that it works perfectly.

This may not be particularly surprising to some, as Microsoft was a launch partner with Dex, offering Office 365 support out of the box. Samsung has also produced Windows Mobile devices before, so it’s clear the two companies have close ties.

The question now, then, is if it works the other way around. Comments on the video so far suggest that it won’t without some tweaking. The Microsoft Display Dock only seems to charge an S8+ plus, rather than launching DeX.

However, there could be a good reason. Unlike Samsung, Microsoft doesn’t offer inbuilt fans in its dock. The Lumia phones got very hot while running Continuum, and it’s not clear how the S8 would cope without that cooling. DeX also offers an ethernet port, so it’s a marked step up for both Lumia and S8 users.

Those extra functionalities could be built on if other manufacturers implementing similar features. A range of docks for different phones could offer different features sets and mean users won’t have to buy adapters or upgrade in the future.

Of course, that’s a big if. Microsoft always struggled to get widespread support for Continuum, and Samsung may run into the same problem. We’ll just have to wait and see if users see the value of DeX.