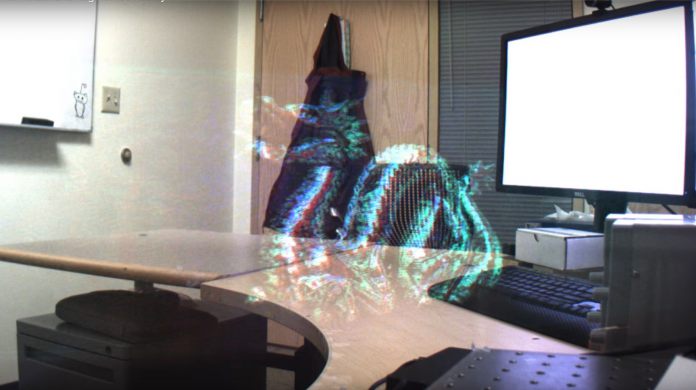 However, researchers of the company are already working on ground-breaking improvements to its mixed reality approach. Microsoft has just published a little overview of how they want to tackle the biggest shortcomings of its HoloLens goggles.

As the involved researchers write in a new paper, they are proposing “a new solution to VR/MR displays that has the potential to address all [of its] problems at once.”

Using a new form-factor as small as standardized sunglasses, they promise not only much lighter devices but also a much bigger field of view than the 30° angle the HoloLens is providing. By using “Lightweight, eyeglasses-like displays” they were able to build a prototype with a wide 80 degree horizontal field of view.

According to them, the “display uses a thin and highly transparent holographic optical element as a combiner, cut in the shape of an eyeglass lens, allowing an optical see-through capability.“

Thanks to Eye-Tracking technology he have been also able to address the so-called accommodation-convergence conflict, which allows image focus to match eye focus in a see-through display. They explain that by using this method, “a holographic display is able to provide per-pixel focus control with virtually no discretization, enabling smooth and natural focal cues to imagery.”

Thanks to eye tracking, also performance of such mixed reality glasses could be improved drastically. By using “eye tracked approximate holograms that have correct image focus and best image quality where the user is looking”, processing needs could be reduced drastically and real-time hologram generation at rates of 90-260 Hz could be achieved.