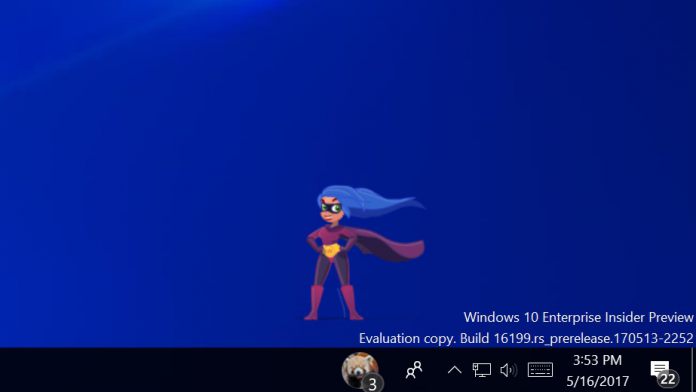 The development of Windows 10 Fall Creators Update is well under way and Insiders are getting some of the new features. Yesterday, Microsoft released Windows 10 Preview Build 16199 for PC with a bunch of additions. One of them is the Shoulder Tap emoji, an anticipated new ability.

Indeed, we have known that this emoji would be coming eventually. It was originally planned to drop with the Windows 10 Creators Update, which rolled out in April. Microsoft clearly missed that and is now pushing out the Shoulder Tap with the fall release.

If you are unfamiliar with the feature, is brings up a giant animated version of an emoji over the taskbar. This happens when a pinned contacted sends an emoji through Skype.

Of course, how much you want this ability will depend on your general outlook on emoji in general. Luckily, if emoji are not your thing, this feature can be toggled off. You can check out the feature in the GIF below.

Microsoft removed the Shoulder Tap gif from their post that exposed a new gear button in the Taskbar pic.twitter.com/W4iCxPnUbS

This is courtesy of Rafael Rivera on Twitter. It was originally posted by Microsoft, but was removed as the company accidentally teased a new settings icon. A taskbar gear will open a new Control Center that was teased.

Arguably the biggest part of the latest Fall Creators Update preview is the launch of Story Remix. Microsoft announced the feature as one of the core features of the next feature upgrade. At Build 2017 last week, the company explained how Story Remix works.

The service allows users to create stories and memories by using photos and videos. By leveraging Microsoft Graph, the service can automatically compile memories from media on a device.

Microsoft demoed how it is possible to integrate 3D creations into memories. Indeed, users can include 3D models and creations from Paint 3D into Story Remix.