Microsoft is underway at Build 2017 and CEO Satya Nadella kicked off the annual developer conference. Indeed, the developer is the focus on day one at Build 2017.

The company clearly wants to highlight that this is a developer’s event first and foremost. Of course, the consumer goodies will land tomorrow, but today Microsoft is getting technical.

Microsoft has recently said the platform is now being used by 300 million users for at least 3.5 hours per day. This, of course, shows that users are buying Windows 10 and using it.

Also during his keynote, Satya Nadella said that the company’s three core products (Windows, Azure, and Office) are now giving more than one billion opportunities to developers. This allows dev’s to create solutions that reach Microsoft customers.

As for Windows 10, Microsoft knows there is still a lot of room for growth. Windows 7 is still the most widely used Windows build in enterprise, while Windows XP is still common.

With that in mind, Microsoft will clearly believe many of those business customers will eventually upgrade to Windows 10.

Microsoft Freezes Hires Across Some Business Areas During COVID-19 Pandemic 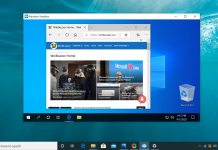