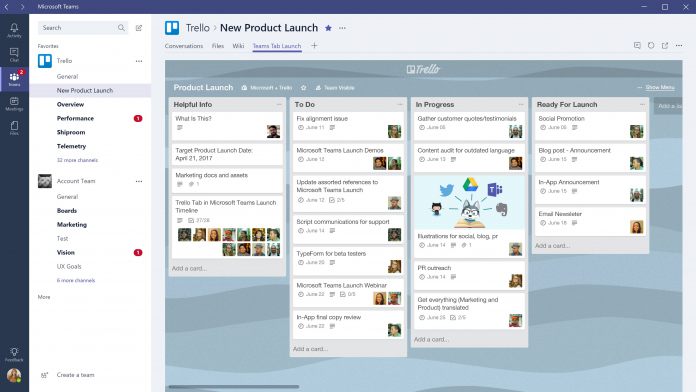 Microsoft teams has scored an important new integration today in the form of the full Trello app. The web-based project management application is now directly available within teams. With this integration, Teams users can access their Trello boards on desktop and the web.

This introduction also brings Teams in line with Slack, which also has Trello links. Microsoft Teams has been a major rival to Slack since it was announced last year. Back in March, Teams was fully rolled out globally and comes with the advantage of tapping directly into Microsoft’s Office 365 subscribers.

By adding more integrations, the company is making Teams a more compelling rival to Slack. Trello is certainly an important addition as the service is very popular in the enterprise space.

The new app can be added through the ribbon on the channel. Users can then log in to Trello and manage boards. This is the full service, so users can do all the things they are used to doing on Trello without leaving Microsoft Teams.

This includes tasks such as creating cards, seeing the latest activity, edit cards, create cards, and just about everything else.

People already familiar with Teams, or indeed Microsoft’s enterprise offerings in general, will know the company has its own Trello competitor. Office 365 Planner performs the same functions as Trello.

Of course, Microsoft would ideally prefer as many people to adopt Office 365 Planner within Teams. However, it is obvious that some customers are not engrained into Office and use other services. Trello is one of the leaders, to giving Teams customers more choice is a good move on Microsoft’s part.

Ahead of its full launch in March, Microsoft issued a huge update to Teams to bring improvements to Meetings and introduce bots. Here is how the new features work in the service:

Meetings – Users will see an improved Meetings experience on Microsoft Teams, thanks to two new additions. Firstly, there is now support for users to conduct one-to-one meetings. This means people outside of teams can now meet with each other. Before users could only meet within a team. With that in mind this is a definite push for Teams to borrow some Skype-like features.

Bots – Microsoft Teams uses bots heavily for automating tasks and helping users. The new update gives bots the tools to enter conversations happening across a team. To activate a bot, users place an @ before the name of the desired bot.