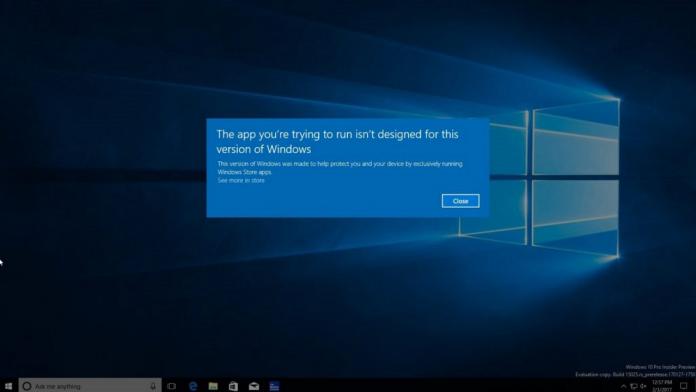 Early this month, rumors began to circulate about Microsoft’s early May event. Several sources suggested that it will have a heavy focus on the company’s new OS, Windows 10 Cloud. We speculated then that it’s an answer to Google’s Chromebooks, and there’s now evidence to back that.

A leak reveals some interesting details about Windows 10 Cloud, including its main competitor. Windows Central has published an internal document that compares the OS to Chromebooks.

Firstly, we can confirm the following recommended minimum specs for Cloud:

However, more interesting is a number of performance metrics that compare it to Chromebooks. Devices in Redstone 2 have a battery life target of 10+ hours, or basically a whole day of on-off use. However, the device will have a slower cold boot than Chromebooks, as well as a slower sign-in.

It’s been clear for some time that Microsoft is looking to break further into the education market, and the “Most students” metric only confirms that. Though the Surface devices are great, they’re too expensive for children or those with student loans.

That’s where Windows 10 Cloud comes in. It’s not a cloud-hosted OS as some expect, but a lightweight, UWP only system. This focus will let it break the major problem with many Windows devices: battery life. It will also cut the risk of malicious software.

The tech giant can then sell Office 365 equipped Windows 10 Cloud laptops to children at a lower price because it can run on inexpensive hardware. Combine that with new features like inking, ebook functionality in Edge and the new power throttling in Redstone 3. It’s starting to look like a very solid competitor to Chromebooks, despite the slightly slower boot times.

Sources suggest that we’ll there more about this at the spring event in May, and could see hardware launched at Build 2017 a few weeks later. It’s going to be very interesting to see what other tricks Microsoft has up its sleeve.