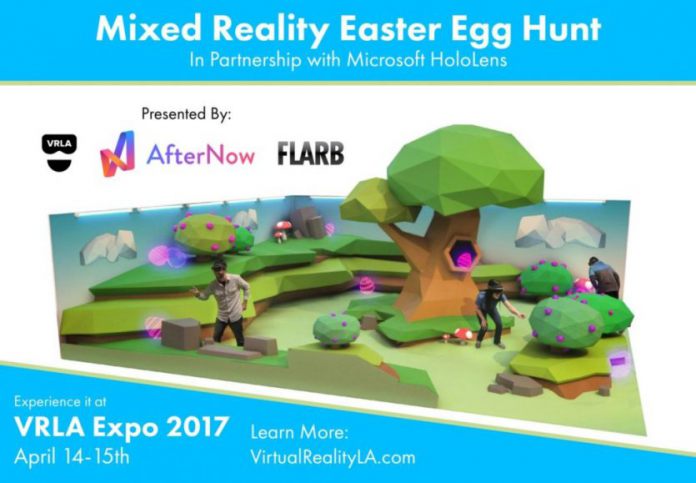 Over the last weekend, Easter egg hunts were certainly a popular activity. However, Microsoft’s HoloLens has the ability to make Easter egg hunts a mixed reality experience. AfterNow and FLARB have developed Easter Egg Hunt, which takes advantage of the environment and augmented reality through HoloLens.

AfterNow’s Philippe Lewicki spoke to Mashable and described the game:

“There’s mapping that’s done with a depth camera that creates a 3D mesh of the world and that’s synced with head tracking.”

We have already seen how games can used mixed reality. Pokémon Go is the classic example, but with HoloLens, titles can become even more immersive and interactive. Starting with the Windows 10 Creators Update, developers can build more impressive titles.

FLARB and AfterNow say Easter Egg Hunt offers a look at the capabilities of creating mixed reality with Microsoft’s HoloLens.

Ralph Barbagallo, the founder of FLARB, spoke about how HoloLens can enhance gaming in the future:

“This project really is a proof of concept for a best case scenario of a much more elaborate pre-built experience. Imagine an amusement style attraction with film-quality assets and more advanced headsets with wider FOVs and the ability to not only additively draw on top of your vision but replace what you are seeing as well.”

In blog post, Barbagallo posted some behind the scenes notes detailing the development of the app. This includes showing how the developers overcame the limited field of vision afforded by HoloLens.

The result seems to be a game that simply works. We are still at the initial stages of mixed reality development, so a title merely doing what it is meant to is something of a win.

It is also worth remembering that the headset is still firmly in its development stages. Indeed, Microsoft announced this year that the consumer version of the hardware will not arrive until 2019.