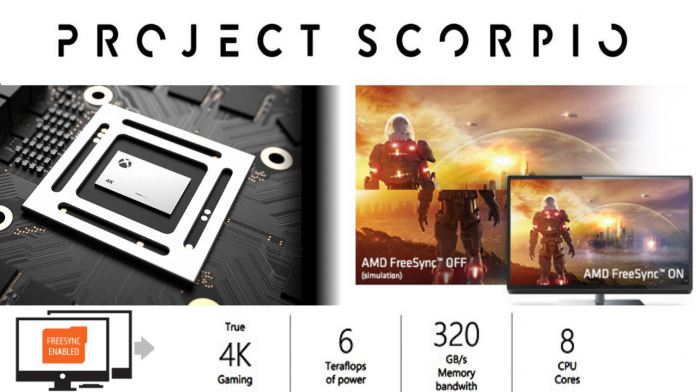 Though Eurogamer’s Digital Foundry produced some impressive specs for Project Scorpio / Xbox Scorpio last week, it appears it was holding something back. Microsoft’s latest console will support both FreeSync and HDMI 2.1.

But what is FreeSync? Though some PC gamers will be familiar with AMD’s feature, console users haven’t had much chance to experience it. First, it’s important to understand an essential problem with how games and monitors work together.

Most modern TVs run at a refresh rate of 60Hz. That essentially means that the screen will refresh sixty times a second. As a result, games look best at 60 frames per second – that way, both are in sync. It’s why developers target 60fps, though some opt for 30 because it divides nicely.

Unfortunately, consistent 60fps can be hard to achieve. It’s difficult to keep a framerate that consistent across environments, leading to a less smooth experience. Though V-Sync eliminates that somewhat, it can cause, juddering, tearing, and other issues.

That’s where FreeSync comes in and why it is so valuable for Project Scorpio / Xbox Scorpio . Its variable refresh rate syncs the GPU and monitor at any framerate, be it 40fps, 60fps or 100fps. In short, it leads to a very fluid gameplay experience that can help considerably in e-sports and fast-paced games.

Despite this, most Xbox Scorpio owners won’t see the effects of FreeSync immediately. It’s currently limited to Display Port video outputs and HMDI 2.1, which hasn’t been widely adopted by TVs. Currently, gamers would have to play on a PC monitor to see the difference.

Those monitors don’t come cheap, especially FreeSync 2 displays, which offer the most benefit. However, Microsoft is clearly thinking ahead. Displays with FreeSync and Nvidia’s GSync seem to be the way forward, and with this move, the Redmond giant is pushing both TV manufacturers and developers to get on board.

Though it may be several years before FreeSync and HDMI 2.1 is implemented in most TVs, it could lead to fewer limitations for developers and a smoother experience for users. It’s definitely not essential for Microsoft to include, and shows that the Xbox team is willing to play the long game.

In the meantime, those with FreeSync monitors will see the benefits as developers enable the option.