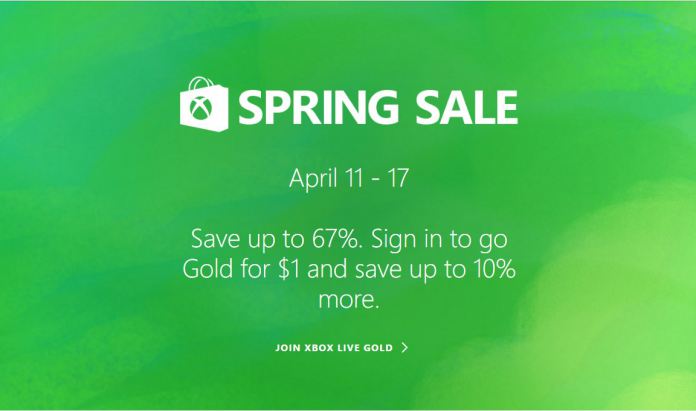 Microsoft is offering huge savings this week across its store and Windows Store. Running from April 11-17th, the Spring Sale has discounts on triple-A titles like Battlefield 1, For Honor, and Overwatch. In addition, the Surface Book is available for $200 less, with further savings on accessories and consoles.

As always, Xbox Live Gold users benefit from bigger discounts. Members get 10% extra savings across a range of titles. Thankfully, Microsoft is handing out a month of Gold for $1, so pretty much anyone can jump on board. The only exception is users in Portugal, Korea, and Brazil.

That said, here are the best deals across Xbox One:

These are just a few of the great deals across the digital download catalog. We’ve focused mostly on AAA titles. There’s plenty more of those on sale, but also some great indie games like Silence, Ark: Survival Evolved and The Escapists. The best deal has to go to The Witcher 3, which is a steal at $30 with all DLC.

Microsoft’s discount on devices is also pretty favorable. This week you can get a free Surface Dock with any Pro 4, as well as the following great deals:

There are plenty of other PCs with great discounts, but we’ve stuck to the highest rated. Some of the devices in the sale have serious drawbacks, so it’s always worth looking at reviews first.

There aren’t any huge savings on Xbox at the moment, but Microsoft has managed to offer some small incentives to those considering it anyway. You can get the Xbox One S 500GB for $50 less, with a free game included. You can also save on these Xbox accessories:

In all, it’s another solid sale by Microsoft, with the best prices in a while. We probably won’t see more big discounts until summer, so it’s worth picking a few things up. You can view the full range on deals on the Microsoft Store.