Microsoft-owned Mojang has taken to its blog today to discuss the upcoming Discovery Update for Minecraft. This major upgrade will come with a host of new features. Probably the most important new addition will be an all new Marketplace. For the first time, users of Minecraft Pocket and Windows 10 versions get the Marketplace.

The Discovery Update, as the name suggests, will have maps and additions for users to find. This will include new stashes with cartographer maps. The Minecraft team collaborated with community-known map creators to offer a catalogue of maps, minigames, and more for the update.

Engaging creators is important for the Discovery Update. This is unlikely to be coincidence considering Microsoft is also launching the Windows 10 Creators Update. Tapping into the creator community is very much the company’s shtick at the moment. 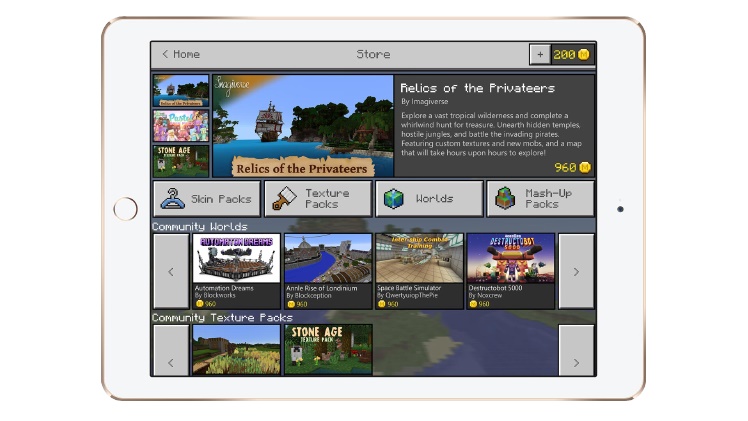 “The idea is to give Minecraft creators another way to make a living from the game, allowing them to support themselves in the creation of ever-greater projects, while giving Pocket and Windows 10 players access to a growing catalogue of fun stuff – curated and supplied by us, safely and simply.”

Minecraft Coins will also be introduced with the update. Users will be able to purchase in-app content directly on their device. For creators, this allows a more flexible pricing model. Microsoft points out that app platforms get a 30% cut of profits, but developers will receive most of the remaining 70%.

The most significant part of the Discovery Update for Windows 10 and Pocket versions is the Minecraft Marketplace. This all-new hub gives users a place to buy community-created textures, skins, and maps. Mojang says content is single-purchase, meaning you can buy it once and use it across any Windows 10 and Pocket Edition device.

Microsoft says the Discovery Update will come to public beta on Android in mid-April. This will only be to test Minecraft Coins. The creator aspects of the update will arrive later in the Spring across platforms.