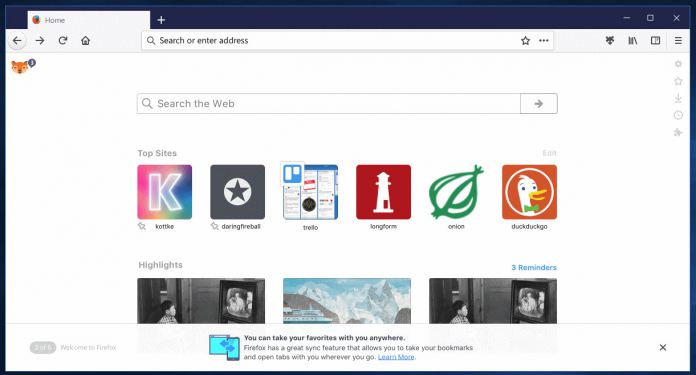 Mozilla will debut a new user interface for Firefox 57, changing the look and feel of its web browser. The new look is still some way off as we are currently on version 52, but version 57 is in testing. The new UI will focus on new tab designs, a new tab page, and a repositioned address bar. Mozilla calls the new UI Photon.

This will be the first major redesign of the browser since 2014’s Australis design language. That introduced rounded tabs and several other UI changes. Since then, the company has been tweaking the design, but it has remained largely the same.

Regarding the tabs, Mozilla is removing the rounded edges of tabs found on Australis in favor of a squared look. This will make the browser look cleaner and more professional.

The new tab page is not radically different from the existing one, although it adds more functionality. In Firefox 57, there will be an Activity Stream, which suggests new sites based on browser activity.

Mozilla will center the address bar with the new build, while adding a three-dot menu to it. This menu will include options for several tasks:

The new UI will begin Nightly testing on June 12 and should reach the Aurora channel in early August. This is when users will get their first glimpse of Photon. Firefox 57 is scheduled to be released later in the year, on November 28.

Firefox 52 is the latest version of Mozilla’s web browser. It is based on the Gecko 52 engine and features automatic captive portal detection, Strict Secure Cookies specification which forbids insecure HTTP sites from setting cookies, and support for WebAssembly.