Prisoner’s Dilemma is a social game that is designed to see how people cooperate with each other. It is based on the idea that people may be cooperative at first, but will ultimately decide to be individualistic.

It is definitely worth reading about Prisoners Dilemma and even playing it. For the purpose of this news, I will refrain from giving a social science lesson, because I am not qualified. However, the most important aspect from Prisoner’s Dilemma is that studies show people are together at first, but eventually become uncooperative.

Numerous studies have been conducted to show this over the years. The Microsoft Research team believed it could be more definitive in its results. By leveraging computing power, the company sought to show how social science data-gathering can be conducted with technology. 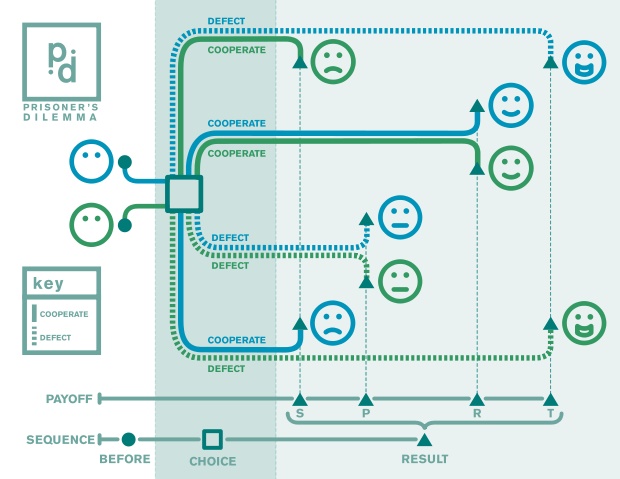 The team created an experiment that allowed 94 participants to play 400 10-round games of Prisoner’s Dilemma. This study was conducted in a virtual lab over 20 consecutive days (not including weekends).  Microsoft Research points out that this is the most comprehensive study of its kind. Normal studies typically last around an hour.

While previous studies show cooperation last for several rounds, Microsoft found that cooperation actually lasts longer. The company says 40 percent of participants were “resilient co-operators” even if they have something to lose.

“Thirty years ago, people were doing experiments that were almost exactly the same as this one, but the big difference is now we are able to do it for a month rather than an hour,” said Duncan Watts, a principal researcher in Microsoft’s New York lab and a pioneer in applying computational techniques to traditional social science problems. “The payoff is that we see behavior happening on very long timescales, and that behavior turns out to be really important for the long-run evolution of cooperation.”

Microsoft Research has already published the study in the Jan. 13 Nature Communications journal. Gathering large data and analyzing it has often been a roadblock for social science. Microsoft explains how using computing power can help overcome these obstacles.

“A lot of human and social activities that used to happen offline in an analog environment are now happening online in a digital environment, and that is generating a lot of data about interactions and behavior,” said Watts. “It has opened a door to a new set of methods that generally come from computer science that can now be applied to social science.”

The study allowed participants to log in from anywhere using virtual labs. This meant games could be held over multiple days and without logistical issues. Over longer times, researchers could observe results that have never been found before.