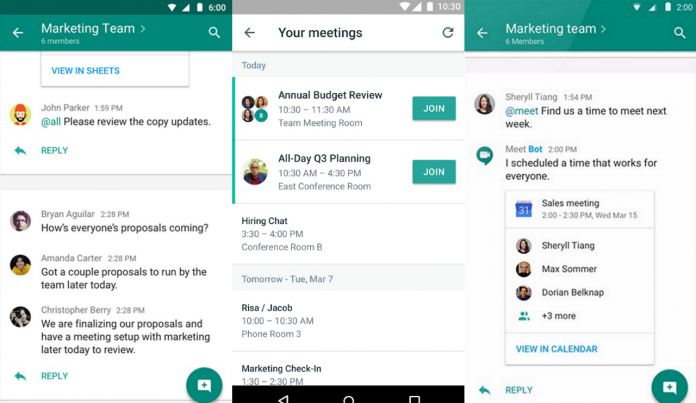 Since the launch of Microsoft Teams, the workplace chat space has become even more competitive. With several companies already using Microsoft’s chat-based workspace in Office 365 and Slack being a much respected protagonist, chat-based services are considered the future of how businesses communicate internally.

Now, Google has introduced a new competitor called Hangouts Chat. The California-based tech giant has split Hangouts into two applications and has launched Hangouts Chat in private beta. Hangouts Meet is already available and is used for video and audio communications.

The two Hangouts applications are designed for enterprise and Google appears ready to take on Microsoft and Slack, by re-entering the team collaboration space.

According to Google, Hangouts Chat is a new approach to team messaging. Users’ teams can have multiple conversations about different parts of a project, and share or preview content.

Currently, only G Suite customers can apply to try out the Hangouts Chat by applying for Google’s Early Adoption Program, here.

The application will be available on Android, iOS, and the web. It will offer rooms just like Slack does, as well as threaded conversations. Naturally, Google’s own services are deeply integrated into the new service.

When you share a file with a room in Hangouts Chat, all members in that room get access to it. However, Google is planning to also bring in third-party services, as well as bots and lightweight scripts (based on the Google Apps script). At launch, advanced bots from Asana, Box, Zendesk and ProsperWork will be available.

Google is also launching a bot which will help users find meeting times easier. Hangouts Chat will also have an advanced search feature and the ability to filter conversations by file types.

Google has updated Hangouts Meet, adding new features such as recording. Thanks to the latest update, the maximum number of participants in a meeting is now 30

Google describes Hangouts Meet as an app with a fast, lightweight interface, designed to make video calls easy. Owners of a G Suite subscription can join a Hangouts Meet meeting directly from a Google Calendar event or through an email invite.