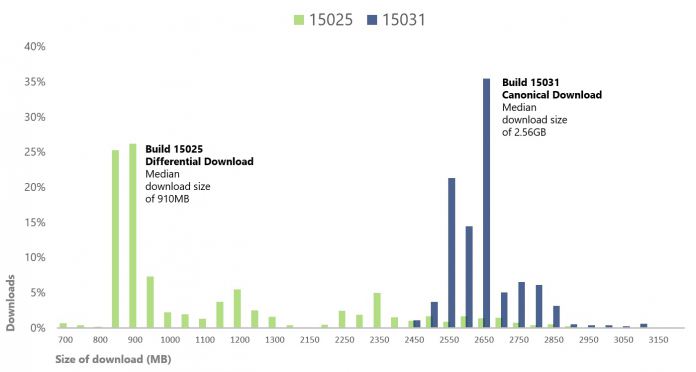 Microsoft is getting closer to its goal of reducing Windows 10 download sizes. The company is now sending change-only updates to Windows Insiders, using the new Unified Update Platform (UUP). Because of this testing, it means the end-of-year feature update will be smaller and download faster.

It is unlikely these smaller downloads will be available in time for the Creators Update next month. However, UUP tests are progressing and users across Windows 10 devices can expect lighter downloads soon, likely with Redstone 3.

The company debuted the Unified Update Platform (UUP) in November. Microsoft developed the platform to reduce the size of updates and to make finding new updates more efficient. This is particularly important for feature updates.

Those who pulled in the Windows 10 Anniversary Update will know it is a time-consuming upgrade. These full build or ‘canonical’ releases weigh in at 2GB for 32Bit Windows 10 systems and 2.5GB for 64Bit systems.

With the Unified Update Platform, Microsoft says it can cut these download sizes to 1GB or under. This can be achieved because UUP only send outs new additions (differential updates) to a build that have been added since the last update.

At the moment, the platform is being tested on Windows 10 PC Insider builds. However, the company says it will work across Windows 10 devices eventually, including HoloLens and Internet of Things (IoT).

“We have converged technologies in our build and publishing systems to enable differential downloads for all devices built on the Mobile and PC OS,” the company said at launch. A differential download package contains only the changes that have been made since the last time you updated your device, rather than a full build.”

We reported in January that Microsoft planned to reduce download sizes by using differential updates as explained above. By leveraging UUP and the Windows as a Service model, the company can reduce downloads by 35%.

“As we roll out UUP in our retail release, users can expect their download size to decrease by approximately 35 percent when going from one major update of Windows to another.”