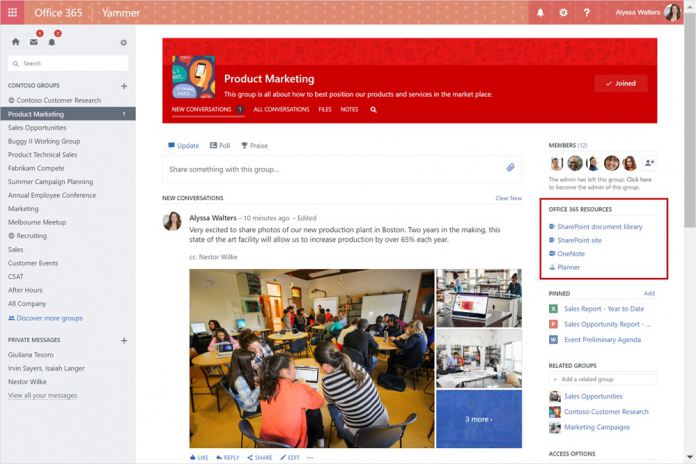 Microsoft has announced the introduction of Yammer in Office 365 Groups. The addition means Yammer groups will automatically be integrated into Office 365 upon creation. With this support, customers get access to a number of Microsoft Office features, such as OneNote and SharePoint Online.

Office 365 Groups is a membership service that allows customers to use a single identity across an Office 365 team. With Yammer integrations, customers using the network service can give a group new services. For example, a Planner for task management, a document library from SharePoint Online, or a OneNote notebook.

These shared resources can now be easily accessed across a group. Microsoft says the integration will roll out in phase, starting with non-connected Yammer groups and remaining Office 365 tenants.

The company will bring Outlook Calendar to the services in the future, while more enhancements to existing integrations will be made.

Microsoft also explains how admins will soon use Azure Active Directory for Yammer:

“Through Office 365 Groups integration, Office 365 administrators will soon be able to use query-based group membership in Yammer-based on Azure Active Directory attributes such as role, location, and manager. This will ensure that certain groups based on organizational structure dynamically include the right members.”

Microsoft acquired Yammer in 2012 for $1.2 billion and has integrated the business social network into its services. If you are unfamiliar with Yammer, it gives users the ability to connect with others across an organization. It promotes working in collaboration and sharing ideas.

Last month, the company confirmed that a dedicated Yammer app for Windows 10 and Mac is coming soon. At the moment, there is only a Desktop Notifier for the service on Windows. However, the new app will be fully featured, although Microsoft has not said specifically what customers can expect:

“We’ve gotten tons of great feedback on the current desktop notifier, and we’re excited to deliver a more full-featured desktop app. It will have all the features people know and love about the Yammer browser experience and additional OS notifications to keep you updated on your groups’ activity.”