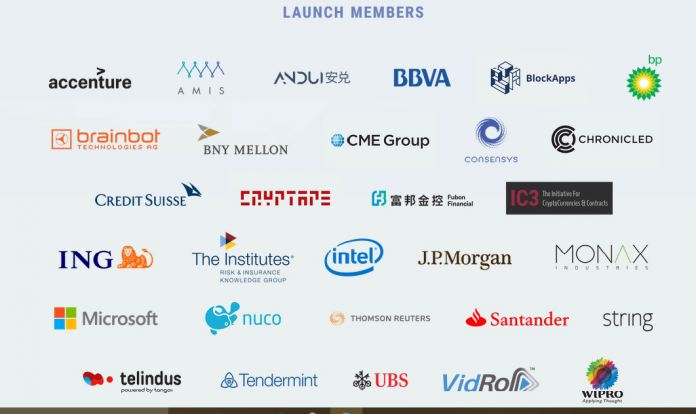 Microsoft has joined Intel, JP Morgan, Accenture and more than two dozen banks and companies in the formation of a new alliance. The Enterprise Ethereum Alliance (EEA) will focus on the use of Ethereum blockchain code.

The founding companies announced the alliance today. Also forming the EEA are members such as Bank of New York Mellon, Thomson Reuters, and UBS.

The official website says “The Enterprise Ethereum Alliance connects Fortune 500 enterprises, startups, academics, and technology vendors with Ethereum subject matter experts. Together, we will learn from and build upon the only smart contract supporting blockchain currently running in real-world production – Ethereum – to define enterprise-grade software capable of handling the most complex, highly demanding applications at the speed of business.”

If you are unfamiliar with Ethereum, it is an open-source blockchain computing platform. Blockchain is the underlying technology for Bitcoin. However, it has become useful beyond the cryptocurrency. It is a distributed shared platform for storing complete histories of record.

Blockchain has become important to companies for storing their records. The company uses it diversely: for example a hotel booking solution and Project Manifest for tracking products.

Microsoft and the Enterprise Ethereum Alliance

Azure Blockchain-as-a-Service, which was announced in November 2015, has been the company’s blockchain focus. Microsoft has leveraged is Project Bletchley blockchain system as a way for customers to create private Ethereum networks.

While announcing its participation in the Enterprise Ethereum Alliance, Microsoft said Ethereum was the first blockchain in Azure:

“We are proud to announce our participation as a launch partner with the Enterprise Ethereum Alliance in addition to making the first reference implementations of Ethereum available in a public cloud. Focusing on requirements like privacy, permissions and a pluggable architecture while retaining its public roots, Ethereum continues to widen the scope of what developers, businesses and consortiums can achieve.

While Azure and Project Bletchley are independent of any particular blockchain system, Ethereum and Enterprise Ethereum are supported by Azure middleware services like Cryptlets, Azure Active Directory for Identity, data services via Cortana Analytics Suite, Key Vault for key management, operations and deployment as well as rich tooling.”