Though Microsoft’s OneDrive is popular in the cloud storage space, its competitors do have an advantage with some features. One of those is differential sync – the ability to sync only the parts of a file that have changed, rather that the whole thing.

Though Microsoft committed to implementing the functionality, it was missing from the October roadmap. Thankfully, a realization by ZDNet’s Mary Jo Foley reveals that the company does still have solid plans.

A closer look at the January 2017 roadmap reveals that Differential Sync is coming in Q2 2017 alongside several other features.

Microsoft will implement Sync with Microsoft Dynamics RMS, as well as instant Office previews and @mentions. This will combine with a share function in Explorer for ease of use, and “Shared with Me” and “Shared by Me” tags. 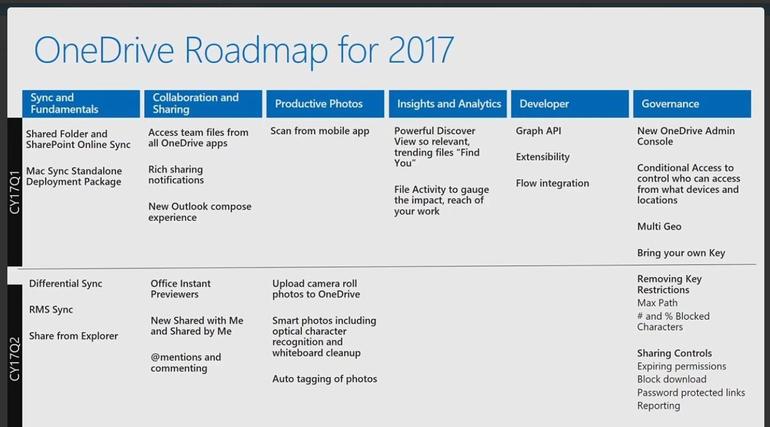 Perhaps more impressive is the addition of smart photos. OneDrive will recognize characters and clean up whiteboards – similar to the function of Office Lens. It will also tag pictures automatically, and remove key restrictions for Max Path, hashes, and percentage signs.

Unfortunately, there’s no word yet on the highly anticipated OneDrive placeholders. Despite confirmation from Microsoft of a release under the name On-Demand Sync, there’s no mention in the roadmaps. It’s possible that the feature won’t launch with the Creator’s Update after all.

Whatever the case, Q2 looks positive for OneDrive. The team is adding highly requested and useful features that will only expand the user base. You can access many of these features already via the OneDrive Preview.