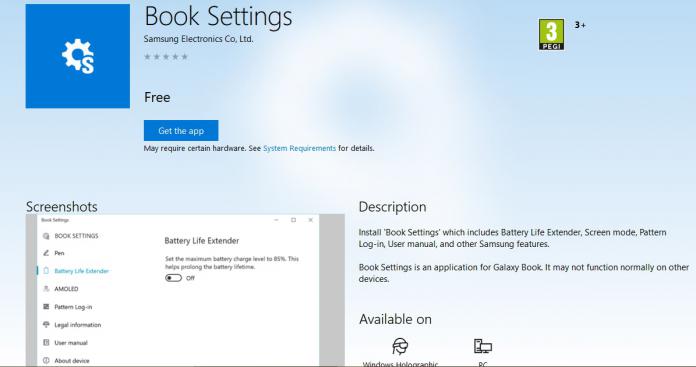 While Samsung is uninterested in Windows as a mobile platform, the company is showing more love to Windows 10 as a tablet and PC OS. Indeed, a new app called “Book Settings” has appeared in the Windows Store. This app could mean that the South Korean company is working on a hybrid called the “Galaxy Book”.

This is not a case of putting two and two together to make five. The actual description of the app makes mention of a device called the Galaxy Book:

“Book Settings is an application for Galaxy Book. It may not function normally on other devices.”

Unfortunately, the accompanying screenshot is vague on details about the device. However, the settings menu does show a Pen section. This suggests the Galaxy Book will mirror the Surface Pro 4 and have a pen-like stylus. Of course, Samsung is already well versed with stylus development through its S Pen for the Galaxy Note series.

Other apparent settings for the device are pattern-style login, AMOLED display changes, and a battery extender.

Samsung has held a trademark on the name Galaxy Book since 2012. However, at the time it was likely the company was just shoring up potential names. A device appears to have grown from that name, although Samsung has yet to confirm it.

It is obvious that any computing device for Windows 10 will see Samsung take another shot at Microsoft’s Surface range. The company already has the Galaxy TabPro S and is currently developing the sequel. That product is a direct competitor to the Surface Pro 4.

Judging the name, it seems that the Galaxy Book will take on Microsoft’s Surface Book laptop. Microsoft welcomes such competition as it helps grow the Windows 10 platform.