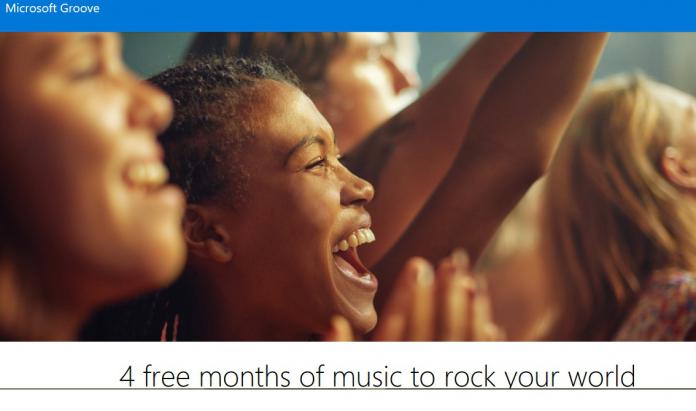 Microsoft is once again enticing new users to Groove Music. The company is now offering four months free subscription to the streaming service. This offer is only available to new subscribers and gives them longer to test the app. Microsoft offered a similar deal back in November.

Indeed, this latest offer mirrors the last. It allows new users a longer grace period before they decide whether to purchase a Groove Music subscription.

New users are still required to sign up for the free one-month trial. Credit details are still necessary and the monthly price is still $9.99. However, instead of getting 30 days, Microsoft will send a promo code that adds a further three months.

Like most subscriptions of its kind, Microsoft will start billing a card once the trial is over. This means Groove Music users who don’t want to stick around will have to cancel before the four months are over.

Interested people have until March 1, 2017 to sign up for this deal. Similarly, the promotional code must be activated before March 14, 2017. Zune and Xbox Music users are also exempt from this deal.

Groove follows the general template of competitors such as Apple Music and Spotify. The service allows users to stream music from Microsoft’s catalog. Streams are unlimited din exchange for the monthly flat rate subscription.

Microsoft has done a solid job populating its catalog, which now has over 40 million songs. This means most users will find what they are looking for in terms of artists and songs. The company has integrated the service across Windows 10 platforms. On Xbox One, Groove provides background music support and allows music videos to be played.

The service also works on Android and iOS. Furthermore, music can be streamed from OneDrive. Groove isn’t perfect, however, with music quality often cited as a low point of the service.